Whole Kashmir desired to accede to Pakistan in 1947: AJK president 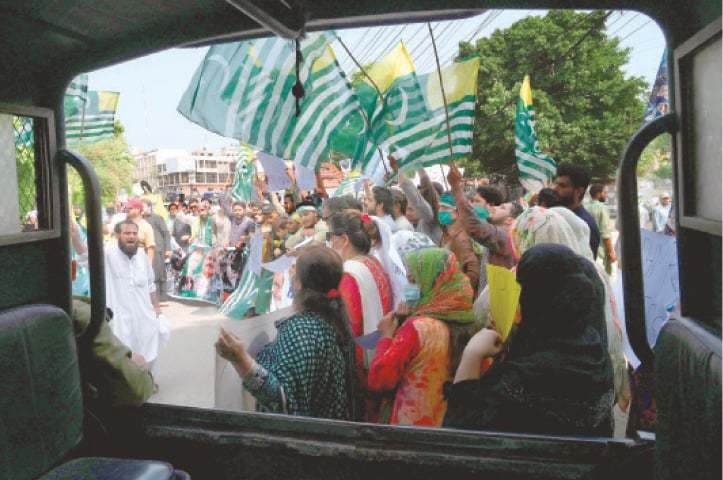 ISLAMABAD: Azad Jammu and Kashmir President Sardar Masood Khan has said that on July 19, 1947, the whole Kashmir State had desired to accede to Pakistan and that spirit still lives strong today.

Had it not been for the connivance of the Indian Army, Dogra Raj and the British rulers, true aspirations of the Kashmiri people would have been realised and they would have become a part of Pakistan on Aug 14, 1947, he said.

The AJK president said this while speaking at a seminar titled, ”Kashmir Accession Day and our Responsib­ilities”, organised by BTM Global and National Press Club in collaboration with Jammu and Kashmir Self-Deter­mination Movement (JKSDMI), led by its chairman Raja Najabat Hussain.According to a statement, the AJK president while thanking the host of the event, Ms Sumaira Farrukh, for her social activities in AJK, said that her organisation provided massive social support to the people of AJK during the Covid-19 pandemic and lockdown which had greatly impacted the lives of the masses.

Mr Khan said that under very difficult circumstances in 1947, the All Jammu and Kashmir Muslim Conference representatives held a conference in Srinagar and passed a resolution vowing to accede to Pakistan. Fulfilling this resolution, he said, became the basis for people of Azad Kashmir and Gilgit-Baltistan to fight a war for independence from the Maharaja. This liberated region we now know as Azad Kashmir and Gilgit-Baltistan had become a defensive bastion for the whole of Pakistan, he said.

Mr Khan said that since the illegal occupation of the occupied territory in 1947 by Indian forces, killings of Kash­miris and aggression continued to this day. In 1947, at least 237,000 Kashmiri Muslims were killed just because they wanted to join Pakistan and now Kashmiris despite the presence of 900,000 troops continued to struggle for their self-determination and peacefully opposed the occupation.

“They [Kashmiris] have vowed to continue their struggle. They have been fighting occupation for 200 years and they will not give up”, he said. The AJK president said that the people of Jammu and Kashmir were grateful to Pakistan for being the only sovereign window for them, for highlighting the Kashmir dispute and fighting the case at international forums. Unfortu­nately, he said, the world order was ste­e­red by realpolitik and major international capitals were still silent over India’s aggression and human rights viola­tions in held Jammu and Kashmir (IOJK).

Chairman Parliamentary Comm­ittee on Kashmir Shehryar Afridi urged the champions of human rights all over the world to stand up for the Kashmiri people. He vowed to take the issue of Kashmir to every international forum. He said the government would take all political parties along and maintain a united stand on Kashmir. He said it was unfortunate that social media accounts were being bloc­ked over raising the issue of Kashmir. Former AJK prime minister Sardar Atiq Ahmed Khan said that Accession to Pakistan Resolution and this auspicious day was an important event in the history of Kashmir. The conference on July 19, 1947, was attended by representatives from all over Jammu and Kashmir and in a way it was a referendum in which the Kashmiris gave the verdict in favour of Pakistan.

The seminar was also addressed by Federal Parliamentary Secretary for Kashmir Affairs and Gilgit-Baltistan Sobia Kamal, Member of National Assembly Noreen Farooq and others.

Meanwhile, Speaker of National Assembly Asad Qaiser said that Kashmiris had sacrificed a lot during the struggle of freedom from Indian occupation. He said the blood of innocent Kashmiris would not go waste. In his message on the Kashmir Accession Day with Pakistan commemorated on Sunday, he said that the fascist Indian government had imposed a lockdown on the valley for the last 11 months and because of this thousands of Kashmiris were facing acute shortage of medicines and food.

He asked the international community to take notice of Indian brutalities in the occupied Kashmir valley.