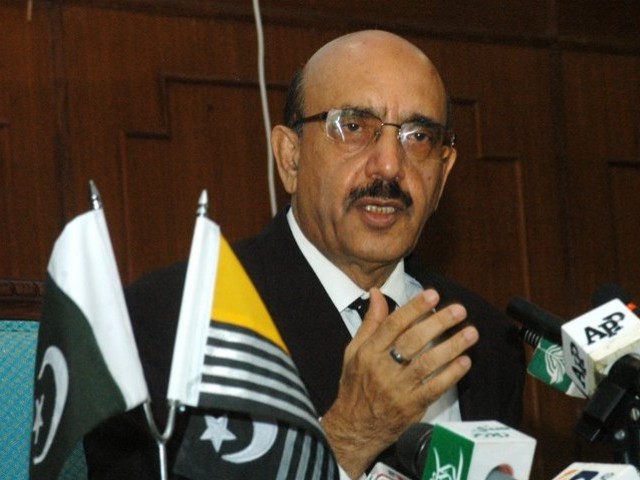 Azad Jammu and Kashmir (AJK) President Sardar Masood Khan has called upon the United Nations to immediately intervene and convene a session of the Security Council in order to save the lives of 8 million Kashmiris living under India’s inhuman lockdown, curfew and military oppression.

“The UN Secretary General Antonio Guterres should appoint a special envoy on Kashmir and the Security Council should hold meetings on Kashmir to come up with a roadmap to implement its resolutions on Kashmir. There should be meetings, and there should be a product.” President Masood told an engaging video conference attended by key UK parliamentarian, Pakistani and Kashmiri leaders and representatives of the diaspora community.

Majority of the British parliamentarians attending the Kashmir webinar said that Kashmir is an international, not a bilateral issue and demanded international intercession to end human rights violations in Indian Occupied Jammu and Kashmir (IOJ&K) and resolve the issue in accordance with Kashmiris’ wishes.

Addressing the session as the chief guest, the AJK president thanked all parliamentary political parties of the UK for expressing concern over the situation of Occupied Kashmir and stressing the need for a peaceful political and diplomatic settlement of the Kashmir conflict.

He made it clear that Pakistan is ready for the solution of Kashmir issue through all means including third-party mediation, in which the Kashmiris are also involved as a party to the dispute.

Rejecting that Kashmir is a bilateral dispute between Pakistan and India, he said that Kashmir as an unresolved issue is still on the UN agenda, and is thus it is an international issue.

Brushing aside India’s baseless allegation that Pakistan was interfering on the other side of the Line of Control (LoC) or is harbouring terrorism, President Masood said that such allegations were an attempt on the part of Modi government to hide crimes against humanity in the disputed territory, and to divert the attention of the international community from the Indian sordid actions in IOJ&K and its own domestic unrest.

Pakistan, he also said, is not against more than 1 billion people of India but against the fascist and fanatic approach of the ruling BJP and the RSS which is designed to target minorities particularly the Muslims to materialise their heinous plan of Hindu hegemony. “Those talking about peace and development have no realisation that Kashmir with its 8 million people is on fire and there is a need to extinguish this fire before doing anything else.”

Under the garb of Covid-19, he said that India is poised to change the demographic profile of Kashmir by introducing the domicile law.

Moreover, the AJK president particularly thanked 600 European MPs who had demanded a peaceful solution to Kashmir issue through political and diplomatic means. He also expressed grief and sorrow over the loss of thousands of British lives in Covid-19.

Addressing the Kashmir webinar, Julie Ward, the member European Parliament 2014-2020, said that human rights should be front and centre; commercial and economic interests should not be pursued at the expense of human rights, and BDS could be pursued in a legal way.

Angela Rayner, chair and deputy leader of the Labour Party, said that her party’s position on Kashmir had not changed and that party leader Keir Starmer’s position hadn’t changed either.