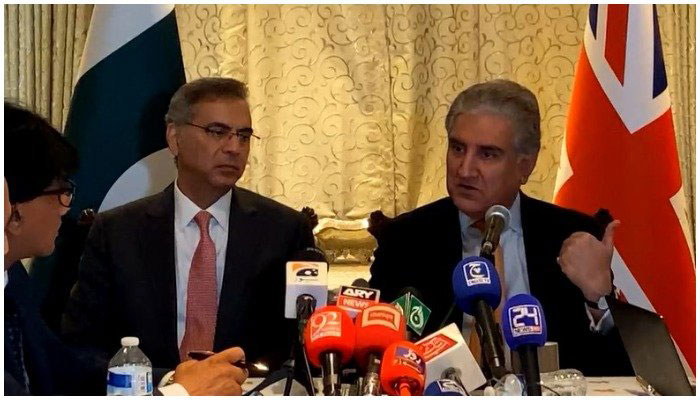 Addressing a press conference at the Pakistan House here on Tuesday, the minister said he had shared a "well-researched dossier" with his British counterpart documenting over 3,000 war crimes and other human rights violations by the Indian occupation forces in IIOJ&K.

He lauded Britain for "playing [a] definitive role in addressing poor conditions of the people of [the] disputed territory and helping in securing Kashmiris' inalienable right to self-determination". The minister said he had informed the British officials that keeping Pakistan on the Red List for a long time while removing other countries with much worse COVID situation was not helpful.

The decision of the English Cricket Board (ECB) to cancel Pakistan’s visit was unfair, said Qureshi, adding that he’d raised the issue with the British foreign secretary and informed him that Pakistan not only bore financial losses, but the unilateral decision had also affected its image.

He said the West seemed ready to engage with the Taliban, as there had been a greater global acknowledgement of Pakistan’s input on how to solve the Afghan humanitarian crisis. He said a humanitarian crisis in Afghanistan was inevitable if there was no engagement and not only Pakistan, but also the West will be affected by the exodus of desperate people facing poverty, disease and hunger.

Qureshi said Pakistan and the West had a shared objective in working together to bring peace and stability in Afghanistan but for that the West needed practical steps including unfreezing nearly $9 billion Afghan money that could help a lot in this time of need.

He said the American officials had rightly told him that some of this amount was frozen because of the court order but the remaining could be released to help Afghanistan. Qureshi said the Western media was trying to blame Pakistan for the situation in Afghanistan but it was the fault of the former Afghan

leaders. He said Afghans were the ultimate sufferers of political chaos in their country. Qureshi said he’d told the Western officials during his hectic schedule that Pakistan was not a safe haven for terrorists and was very keen to see a peaceful Afghanistan, as this will benefit Pakistan and the region.

Qureshi said the current govt had nothing to do with the cases against the opposition, as most of them were made by the PMLN and PTI against each other and were already in the pipeline with the NAB when the PTI came into power. He said, “There should be no witch-hunt and accountability should be across-the-board.”