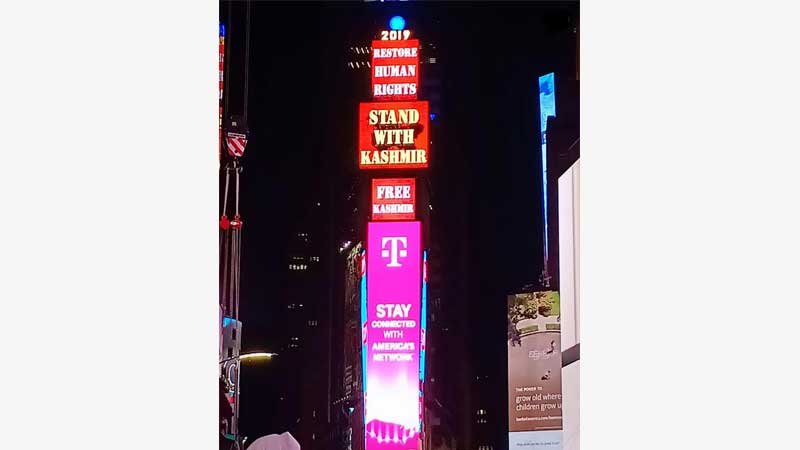 The Pakistani community in the United States has highlighted the grave human rights violations being carried out by Indian security forces in Indian-held Kashmir by sponsoring a screen advertisement at the iconic Times Squares in New York.

According to reports circulating on the social media, the Pakistanis have also camped outside the United Nations Headquarters to raise their voice against Indian aggression in the occupied valley. The advertisement is part of a public outreach campaign on the occupied valley.

The protesters have camped out in front of the United Nations to raise their voice against the Indian atrocities when Indian Prime Minister Narendra Modi addresses the UN later this week. Last week, a group of activists also protested outside the ‘Howdy Modi’ event in Houston. The official Twitter account of the Pakistan government on Thursday also tweeted out a picture of the Times Square lit up with signs in support of the people of occupied Kashmir, highlighting lines such as ‘Stand with Kashmir’ and ‘Free Kashmir’.

“With the extraordinary efforts of PM Imran Khan, Kashmir issue has now become a Global concern. The voice of people of IOJ&K is once again being heard in the highest diplomatic forums. “Stand With Kashmir” has been highlighted on Times Square New York, today.#StandWithKashmir,” the official Twitter handle of Pakistan government posted. Meanwhile, Human rights activists protested outside the headquarters of BBC and CNN on Thursday to protest the apathy over the coverage of Indian occupied Kashmir as lock-down of more than eight million Kashmiris by Indian government. The activists, mainly Kashmiri-origin British nationals, gathered outside the BBC office and demanded the publicly funded broadcaster to cover the situation in Kashmir, which has been cut off from the rest of the world for around two months now.

The protesters were carrying banners which read: “crime against humanity”, “wake up BBC”, “wake up CNN”, “stop use of pellet guns”, “India should be held accountable for crimes against humanity”, “impose economic sanctions on India”, “justice for victims of mass rape”, “freedom for Kashmir”, “wake up US, UK, UAE, OIC” and “Narendra Modi is a criminal”.

The protesters called on the BBC and CNN editorial management to “wake up” and cover Kashmir impartially. Those who took part in the protest said they had gathered to show solidarity with the people of Kashmir who are suffering incalculable human rights abuses under the brutal occupation of India for the past seven decades, which has turned into a humanitarian crisis following India’s illegal actions since 5 August The protest organisers said in their speeches that for the past 53 days, over 8 million Kashmiris are under siege by Indian forces and have no access to internet, along with communication services being suspended. Journalists, especially foreign, are being denied access to the Indian occupied Kashmir, which is in violation of press freedom, and universal declaration on human rights. The protesters stated that BBC did a few good reports in the initial days after Article 370 was abrogated, but stopped providing any coverage in the days following it and there has been no coverage of any kind on BBC and CNN as the massive humanitarian crisis unfolds.