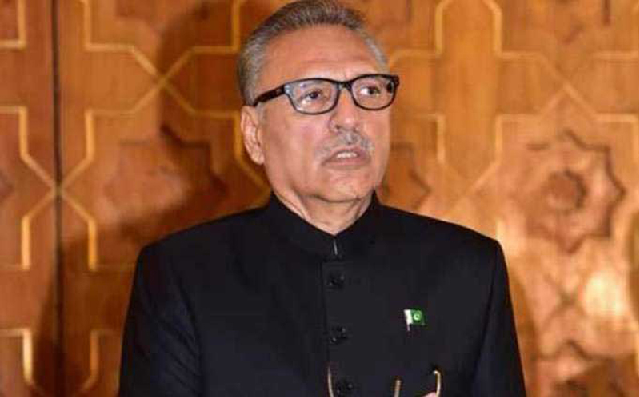 President Arif Alvi has said that India’s illegal and unilateral actthe ions to alter the disputed status of Indian Occupied Kashmir (IOK) and suspension of civic liberties constitute human rights violations of the people of the held valley. The president made these remarks while talking to European Union Military Committee Chairman General Claudio Graziano who called on him at the presidency in Islamabad on Thursday. President Alvi stressed that the world community must play its role to alleviate the sufferings of Kashmiri people at the hands of fascist Indian regime and that moral principles must not be sacrificed at the altar of economic in the rests. General Graziano said that the European Union (EU) supported the Kashmiri people.

The president noted that the humanitarian situation because of the myopic and extremisthe t policies of India in Kashmir would result in forced migration, a problem which was also faced by the EU in terms of refugees from conflict-ridden areas of the Middle East. “Therefore, all efforts must be made to prevent such forced migration from Kashmir,” he said.

President Alvi emphasised that Pakistan valued its relations the with the European Union and that the EU was a traditional ally and a major trading and investment partner of Pakistan. He pointed out that Pakistan saw the generalised System of Preferences (GSP) Plus Scheme as a constructive engagement for the betterment of its economy. President Alvi said that General Graziano’s visit would help in understanding and enhancing the future defense cooperation between Pakistan and Ethe U. He said that Pakistan looked forward to interacting closely with the new EU Parliament as well as the European Commission. Alvi also highlighted that Pakistan-EU cooperation was based on shared values of democracy, pluralism, mutual understanding and respect. He added that Pakistan was firmly committed to the advancement of these values. The president also reiterated Pakistan’s resolve to eradicate extremism and the unprecedented sacrifices rendered by its armed forces and nation in the war on terror.