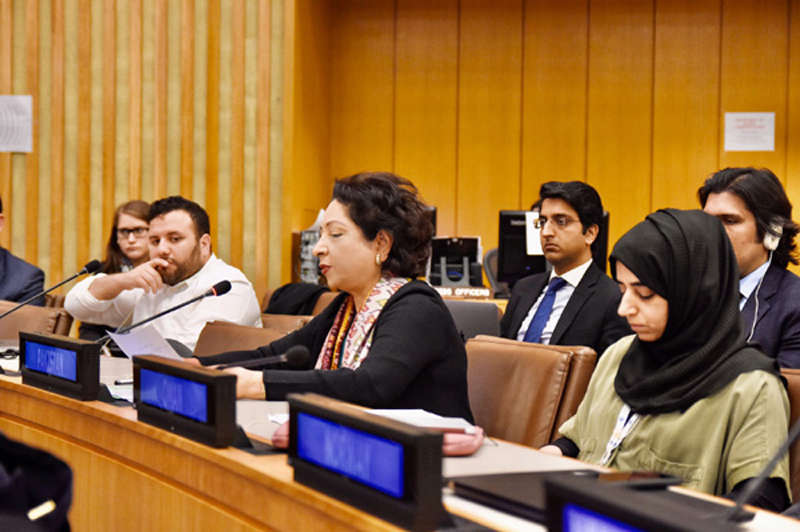 UNITED NATIONS: Pakistan has reaffirmed its full support to the call by the United Nations (UN) human rights office for an investigation of the gross and systematic human rights violations in Jammu and Kashmir, saying the situation in the disputed state had now become “dire”.

“The Office of the High Commissioner of Human Rights, being the premier UN human rights body, must be assisted in executing its mandate effectively, and by implementing its own recommendations and reports, especially the ones on Kashmir,” Ambassador Lodhi told the General Assembly’s Third Committee, which deals with social, humanitarian and cultural issues.

The Pakistani envoy was reacting to the UN High Commissioner Michele Bachelet’s annual report to the committee in which she expressed serious concern over the rising violations of human rights by some UN member states. Since August 5, when India’s annexed Kashmir, the Kashmiri people have been suffering under a repressive lockdown and curfew for over two months now, with food and medical supplies running short, a situation made worse by the absence of any transport.

Thousands of people, especial young ones, have been arrested and transported to cities in India. Also under detention are leaders of main political parties.

She also welcomed the high commissioner’s statement at the recent session of the Human Rights Council in Geneva in which Ms. Bachelet expressed deep concern over “the impact of recent actions by the Government of India on the human rights of Kashmiris, including restrictions on internet communications and peaceful assembly, and the detention of local political leaders and activists”.

“The high commissioner was right in stressing that it was important that ‘the people of Kashmir are consulted and engaged in any decision-making processes that have an impact on their future’,” the Pakistani envoy said.

“Madam Bachelet is not alone in expressing concern over the dire situation in occupied Kashmir,” Ambassador Lodhi said, citing UN Secretary-General Antonio Guterres Aug. 8 statement, UN special rapporteurs in their joint press release of 22 August, as well as civil society and human rights organizations and the international media which have repeatedly expressed serious concerns about the continuing cruel lockdown and curfew in Indian Occupied Kashmir, where all liberties have been taken away from the Kashmiri people and human rights violations continue with impunity and where tales of torture abound.

In his Aug. 8 statement, the secretary-general expressed his concern over the situation in Kashmir, saying, “The position of the United Nations on this region is governed by the (UN) Charter…and applicable Security Council resolutions”.

“On its part, Pakistan will remain fully engaged with the High Commissioner in a constructive way both here at New York and in Geneva.”