New York, US - Gurpatwant Singh Pannun still has vivid memories of the summer of 1984. A teenager at the time, he remembers security forces taking boys from his village in Punjab in the aftermath of a deadly Indian army operation in the Golden Temple, the holiest of Sikh shrines.

On Friday, Pannun, a lawyer in New York, stood outside the United Nations alongside thousands of protesters to rally for human rights in Kashmir as Indian Prime Minister Narendra Modi delivered his speech at the world body's General Assembly (UNGA).

Pannun, along with others in the Sikh community, argues the violence against them in 1984 by the Indian forces mirror the current crisis in Indian-administered Kashmir where a lockdown has been in place for almost two months following the Indian government's decision to scrap a constitutional provision that gave special rights and a degree of autonomy to the Muslim-majority state. That is why, Pannun says, he is helping sue Modi over alleged human rights violations in Kashmir. Earlier this month, a group called Kashmir Khalistan Referendum Front - of which Pannun is a spokesperson - filed a lawsuit in Houston before the Indian prime minister's arrival to the Texan city to address a rally dubbed Howdy Modi.

"The lawsuit is based on a specific US federal law, which is called Torture Victims Protection [Act] - any official, under the official capacity, if they're involved in or have commanded extrajudicial torture, they can be held accountable if they're found in this particular jurisdiction," Pannun said. New Delhi has defended the cancellation of Kashmir's special rights as a way to free the region from separatism and help its economy grow faster. Before the controversial August 5 move to scrap Article 370 of the constitution, the government imposed a communications blackout and deployed thousands of extra troops to the disputed territory.

Referring to the reports of mass arrests and alleged torture since then, Arjun Sethi, an American Sikh human rights lawyer and law professor in Washington, DC, said that "a lot of the atrocities that we're seeing happening in Kashmir today also took place in Punjab throughout the 1980s and 1990s.

"Sikhs should be particularly sensitive to the violence that's unfolding today because it mirrors so much of what our community experienced in Punjab."

Beyond relating to the present-day struggles in Kashmir, the Sikh community of Punjab and the people of Kashmir go back a long way, according to experts. "Punjabi cities used to host Kashmiri peasants and artisans who fled Kashmir because of repression by the Dogra forces in the pre-1947 era and because of excessive taxation," said Mohamad Junaid, assistant professor and Kashmiri scholar in North Adams, Massachusetts, "and so Sikhs already knew the struggles of Kashmiris."

"Sikhs around the world have been deeply involved in movements of social justice, movements of global justice," he added. "Sikhs who consider Punjab their spiritual and actual homeland, for them Kashmir is like a neighbour, so wherever Sikhs are from - Canada to California - they still see Kashmiris as neighbours. And so their solidarity is like the solidarity that one extends towards a neighbour in trouble." 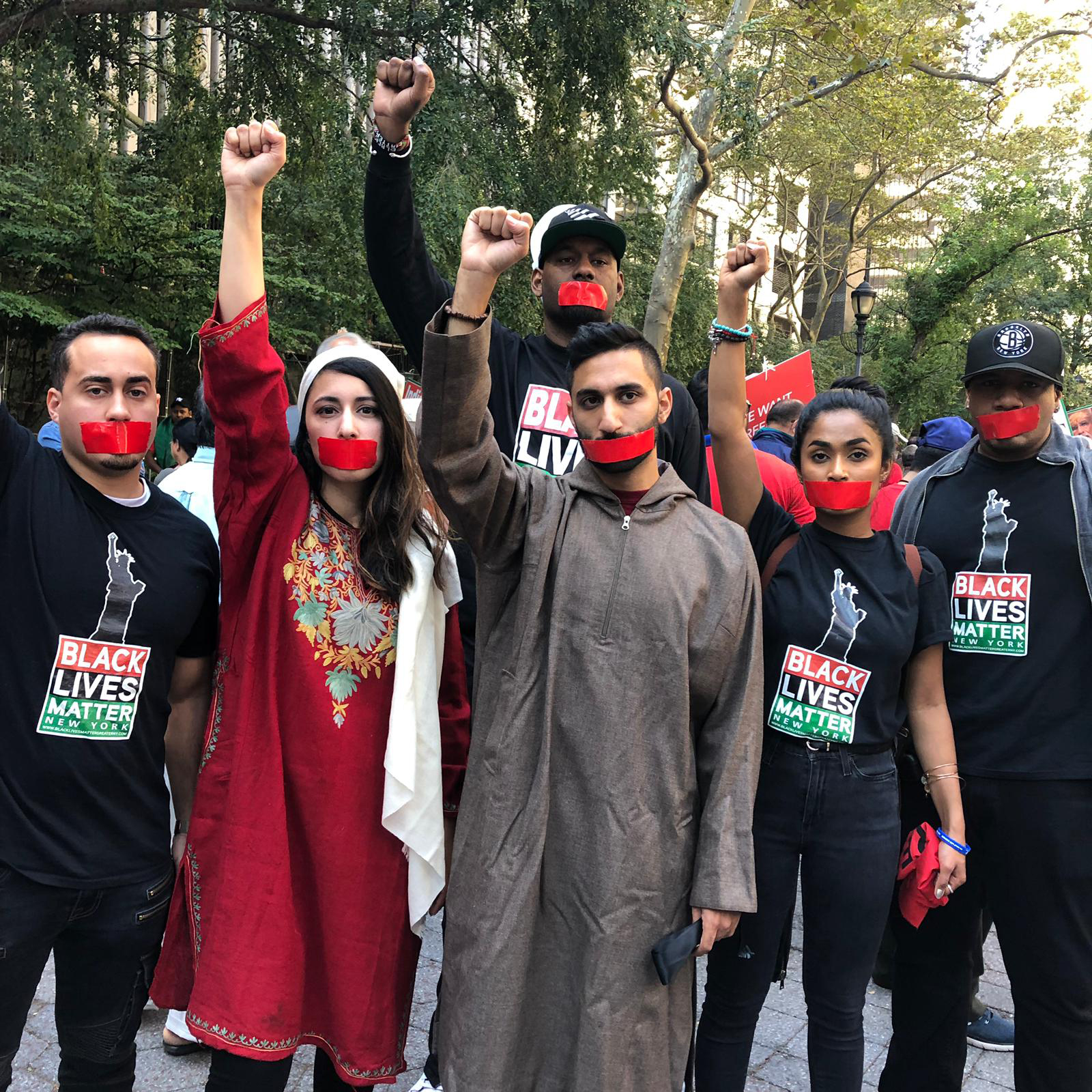 Other movements 'Stand with Kashmir'

A number of other groups have also been attending since August when the grassroots organisation Stand With Kashmir began protesting against the Indian government's move. Among them have been pro-Palestine groups such as Within Our Lifetime and Palestinian Youth Movement, as well as the Black Lives Matter movement.

On Tuesday, as Modi was being honoured by the Gates Foundation at an event in New York, protesters rallied outside, including members of the South Asian Solidarity Initiative and the Khalistan Movement, a Sikh separatist movement.

On Friday, the day Modi addressed the UNGA, crowds of protesters rallied outside the world body. The rally was organised by a coalition of groups "seeking an end to the Indian occupation", according to one of the organisers, who estimated that at least 10,000 people had participated.

Members of various faith-based and ethnic groups were among them.

"We're here to support our brothers and sisters, Christians in Kashmir and Pakistan," said Hubert George, chairman of Hope for Persecuted Christians, an organisation founded by Pakistani Americans that works with Christian minorities in the country.

Sikhs for Justice, a group Pannun serves as legal adviser to, had an estimated 2,000 members present.

"It is our struggle and the struggle Kashmiris feel that connects us," Mario Benabe, vice chair of Black Lives Matter of Greater New York, told Al Jazeera over email. "The profiling. The targeting. The occupied force and violence. The killing of people and the abuse of women brings us here today," he added.

The protests underline increasing solidarity between grassroots movements who were supporting each other's causes - and some of the organisers were feeling that spirit.

Benabe tied the struggle across the world, from the occupied Palestinian territories to Brazil's indigenous communities, to "ritualised humiliation and violence" against communities of colour in the United States. "We all recognise that our struggles are impacting us in the same way," he said. "We have a right to exist and as our global resistance continues to expand and connect us all - one vital truth remains - there are more of us than them."