Kashmiris are not alone in the world, says US presidential candidate 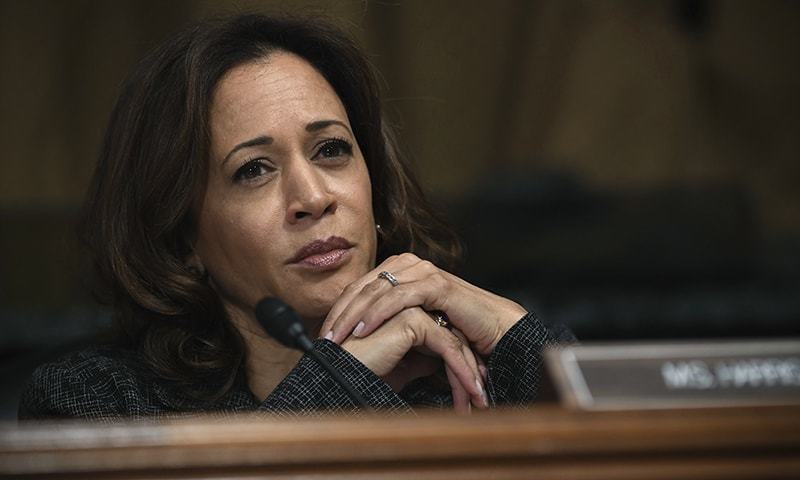 WASHINGTON: “We have to remind the Kashmiris that they are not alone in the world,” says Kamala Harris, a major Democratic candidate for the 2020 US presidential election.

“We are keeping a track on the situation. There is a need to intervene if the situation demands,” she said in a recent statement. Her comments are even more significant because she is of Indian descent from her mother’s side.

So far, three major presidential candidates have spoken on Kashmir — Bernie Sanders, Elizabeth Warren and Kamala Harris. All three are members of the US Senate and have strong chances of being on the Democratic ticket for 2020, which may have two names from this list, one for president and the other for vice president.

And if US President Donald Trump’s repeated offers to mediate between India and Pakistan over Kashmir are also counted, the number of US presidential hopefuls expressing concern over Kashmir goes up to four. So far, Mr Trump is the only Republican candidate for 2020.

On Saturday, Senator Warren reminded India that “the rights of the Kashmiri people must be respected”. And Senator Sanders said that India’s Aug 5 action to annex Kashmir was “unacceptable”.

He also urged the Trump administration to “speak out boldly” and back “a UN-backed peaceful resolution that respects the will of the Kashmiri people”.

Another Indian American lawmaker, Congresswoman Pramila Jayapal, joined 13 of her colleagues in the House of Representatives to write a joint letter to Indian Prime Minister Narendra Modi last month, asking him to lift the restrictions he had imposed in Kashmir.

Last week, a US Senate panel attached an amendment to a finance bill that requires India to end its lockdown and curfew in Kashmir valley and fully restore communications links to the occupied valley.

Commenting on these arguments, President Azad Jammu and Kashmir Sardar Masood Khan said at a seminar in Washington last week that “there is a palpable shift” in the US position on Kashmir.

The Indian clampdown in the occupied valley has forced the international community, particularly the Americans, to have a closer look at this 72-year old dispute, he added.

Marvin Weinbaum, director of the Afghanistan, Pakistan programme at a Washington think-tank, the Middle East Institute (MEI), agreed with Mr Khan’s assessment, as did a co-moderator Raza Rumi. Prime Minister “Modi has handed a gift to Pakistan by bringing the issue to the fore as it has never been before this”, Mr Weinbaum said. “This has put India on the defensive.”

The issue also figured prominently at the 74th session of the UN General Assembly (UNGA) last week where President Trump spoke about this issue in joint news briefings with both Indian and Pakistani prime ministers.

On three different occasions, including one in which Mr Modi was also sitting beside him, President Trump repeated his offer to mediate between India and Pakistan over Kashmir. He did so, knowing that Mr Modi does not like to hear this “m” word and has publicly rejected his offers in the past.

But as Mr Weinbaum and Mr Rumi pointed out at this MEI seminar on Kashmir, the American media is far ahead of the US government in condemning the Indian annexation and gross human rights violations in India-held Kashmir.

“This is significant because for more than 70 years, Pakistan has been attempting to draw the world’s attention to the Kashmir issue … with limited success,” Mr Weinbaum said.

“And when Pakistan has tried to push the issue, whether covertly or overtly, it backfired.”

President Masood Khan, who accompanied Prime Minister Imran Khan to the UNGA to highlight the Kashmir issue and then came to Washington for similar meetings with US lawmakers, officials, journalists and others, noted that attitudes were changing across the world.

Talking to journalists at the Pakistan Embassy, Mr Khan said that similar pressures were also building up in other world capitals, particularly in Europe and China.

Mr Khan said that the international pressure had revived his “hope that India will be forced to resolve this issue peacefully and in accordance the wishes of the Kashmiri people”.