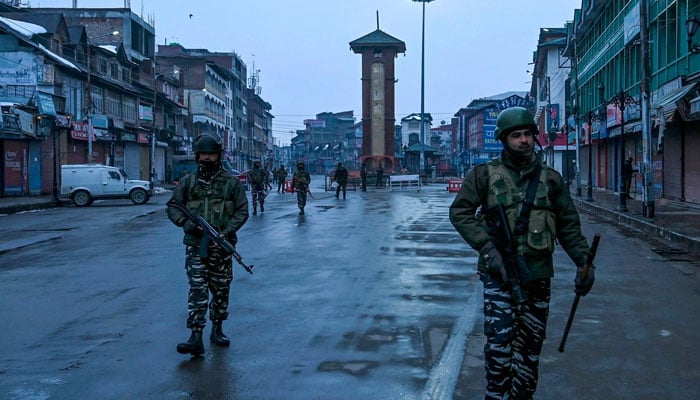 According to a recent survey conducted in Indian-held Kashmir by researchers from a university in Kashmir and New York's Skidmore College and reported by the international media, 91 percent college and university students of occupied valley want a complete withdrawal of Indian forces from the region.Around 600 college and university students participated in the survey following the revocation of Article 370 from the Indian constitution and shifting of hundreds of thousands of Indian forces, adding to already-stationed there, making it the most militarised region in the world.The survey, carried out in late 2019, observed that 91 percent of the respondents wanted complete withdrawal of Indian forces from the region and the same percentage supported a referendum to decide the future status of the highly disputed region. The survey and its results showed that the unilateral Indian action to merge Kashmir with India would not deliver for the Modi government.

Following President Arif Alvi’s visit to China, a joint statement said both sides had exchanged views on the situation in Kashmir, and the Pakistan side had briefed the Chinese side on the “latest developments, including its concerns, position, and current urgent issues”. The joint statement added: “The Chinese side underscored that it was paying close attention to the current situation and reiterated that the Kashmir issue was a dispute left from history, and should be properly and peacefully resolved based on the UN Security Council resolutions and bilateral agreements.”

As expected, Indian external affairs ministry quickly responded, saying India rejected the reference to Jammu and Kashmir in the joint statement. “The Union Territory of Jammu and Kashmir is an integral part of India. Issues related to J&K are internal matter of India,” the Indian spokesperson said. “We expect other countries, including China, not to comment on matters that are internal affairs of India and also to respect India’s sovereignty and territorial integrity just as India refrains from commenting on internal issues of other countries.” According to observers, it was a knee jerk reaction, re-iteration of New Delhi’s old stance and showed its failure to assimilate the Valley into India as the Modi government had planned months ago.

Meanwhile, the Indian government has allocated Rs1 lakh crore for occupied Jammu and Kashmir in the first annual budget for the new Union Territory. The Indian finance ministry presented the budget in Indian parliament with finance minister claiming it was the “highest allocation” for the occupied Valley. The Indian minister claimed that Rs38,000 crore had been earmarked for various development schemes, an increase of 27pc from the last year and occupied J&K could have an economic growth of record 11pc. The Indian parliament was also told that “79 terrorist incidents” had taken place in Jammu and Kashmir since the central government abrogated Article 370 and 49 militants were slain. The figures of 82 security force personnel killed in Kashmir terrorism after the Pulwama attack was also given.

It should be noted that while almost all Kashmiris have shown indifference towards the budget for the Valley, the figures given for violent incidents in Kashmir since August 5, 2019 are incorrect and greatly toned down. At the same time, a court in Jammu framed charges against Kashmiri leader Yasin Malik and six others for being allegedly involved in the killing of four Indian Air Force (IAF) officials in 1990 in held Srinagar. “Five of the seven accused were produced before the TADA Court. The court has framed charges against all the seven accused including Yasin Malik and Showkat Bakshi, lodged in Tihar and Ambedkar Nagar jails respectively. Malik and Baskshi appeared via video-conferencing.” Yasin Malik and Showkat Bakshi pleaded not guilty and wanted a trial. Five other accused also want a trial.

Also, going on the defensive, in an interaction with the newly-formed Jammu & Kashmir Apni Party (JKAP) delegation, Union home minister Amit Shah dismissed the talk of demographic change in Jammu & Kashmir as “baseless”. On the other hand, Narendra Modi said his government will work to restore the statehood of Jammu and Kashmir “at an early opportunity” which has not yet come seven months after the revocation of Article 370.

Earlier, detained political leader Farooq Abdullah was released by the Indian government but there was no initiation of political process in the occupied state due to given situation. The Annual Human Rights Review 2019, a report published by the Jammu Kashmir Coalition of Civil Society (JKCCS), a prominent human rights group in the erstwhile occupied state, sadly reported: “The year 2019 will be remembered as a landmark year in the annals of J&K’s chequered history as the last vestiges of J&K’s limited autonomy were permanently revoked by the Government of India on August 5, 2019.” It said there was a marked escalation in the scale of violence, encounters, illegal detention, and crackdown by security forces. The report questioned the legitimacy of the Indian government action, saying that it was in violation of Article 1.1 of the International Covenant on Civil and Political Rights, which states: “All peoples have the right of self-determination. By virtue of that right they freely determine their political status and freely pursue their economic, social and cultural development.” The report outlined the military siege of the Kashmir Valley and chronicled reports of allegations of mass arrests, torture, killings, use of excessive force, harassment and intimidation.

As the more the Indian government tries to change the situation in held Valley, the more it does not remain the same, it just worsens.