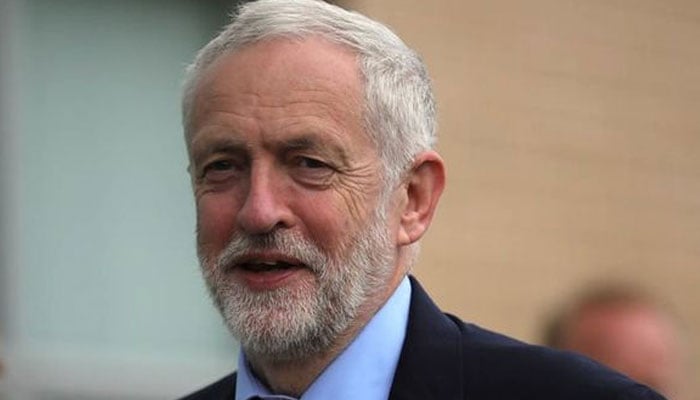 LONDON: The Labour Party leader has refused to be bullied by the Indian government over his unequivocal support for the oppressed people of Kashmir in the wake of revocation of Article 370 by Narendra Modi’s government and an organized campaign using over 100 British Indian community organisations to bully the Labour Party.

The Labour leader has pledged that his party will remain committed to ensuring that the rights of all citizens of Kashmir are "respected and upheld".

In a letter addressed to the Indian community organistaions, Jeremy Corbyn said: “The Kashmir emergency motion came through the democratic process of the labour party conf. However, we recognise that some of the language used could be misinterpreted or lead to misunderstanding about the Labour policy among the India diaspora.”

Ignoring protest calls by the Indian government and its affiliate organisations in the UK, Jeremy Corbyn wrote: “The Labour Party is gravely concerned at the on-going human rights crisis in Kashmir as well as the media and communication lockdown imposed on the region.”

Jeremy Corby was targeted by the Indian government through BJP-affiliated Indian community groups who signed a letter criticising the Labour Party for its alleged “ill-conceived and partisan” resolution to the Kashmir crisis at the recent annual conference of the party. On September 25, Labour Party passed an emergency motion allowing international observers to enter Indian held Jammu and Kashmir and supported the right of self-determination for Kashmir people. The adoption of resolution caused a big diplomatic and international embarrassment to Indian govt. The BJP govt then authorized a campaign through Indian High Commission against the Labour Party leader, using British Indian community organisations such as the Indian Professionals Forum (IPF), Indian National Students Association (INSA) and Hindu Council UK.

The open letter accused Mr Corbyn of creating a “divisive” motion more concerned with UK politics. It said: “We are writing collectively, as British-Indian community organisations, to express our deep dismay that Her Majesty’s Opposition has abandoned a long-standing cross-party position on Kashmir as a strictly bilateral matter between India and Pakistan, and in doing so, sown the seeds of community disharmony in the United Kingdom. The Labour leader said that the party understood the concerns and sensitivities of Indian community in Britain about the situation in Kashmir and took those concerns very seriously but there will be no change in the democratic policy of the party on conflict issues such as the case of Indian occupied Kashmir. Corbyn told Indian community groups how important human rights are to Labour values.

“The labour party is an internationalist organisation and is committed to ensuring the human rights of all citizens of Kashmir are respected and upheld. That remains our priority and I agree that we should not allow the politics of the Sub-continent to divide communities here in Britain.” The Labour leader wrote in the letter that he spoke to Ruchi Ghanashyam, the Indian High Commissioner in the UK, on 7 September and condemned the vendalisation of High Commission by a few on the 15th August protest against India. Supporting the demands of Kashmiri for a plebiscite, Corbyn said: “There is an urgent need for India and Pakistan to work together on bilateral basis with the support of international community to reach a peaceful political solution which protects the human rights of Kashmiri people and respects their right to have a say in their own future.” A day after on September 26, a spokesperson for the Indian Ministry of External Affairs in New Delhi said: “Government has noted certain developments at the Labour Party Conference on September 25 pertaining to the Indian State of Jammu and Kashmir. “We regret the uninformed and unfounded positions taken at this event. Clearly, this is an attempt at pandering to vote-bank interests. There is no question of engaging with the Labour Party or its representatives on this issue.” The Labour Party have unanimously passed an emergency motion on Kashmir at its annual party conference in Brighton last month demanding the restoration of human rights.

The Labour delegates stated that a “major humanitarian crisis” was taking place in the held Kashmir and that its people “should be given the right of self-determination in accordance with UN resolutions”. British-Pakistani Uzma Rasool, a delegate from Leyton and Wanstead CLP, submitted the motion. During the conference, she declared that Kashmir had seen “72 years of human rights violations, of gang rapes and mass rapes state endorsed by armed forces, and pellet gun injuries”.

Labour MP Naz Shah supported the motion and pleaded for others to join her.