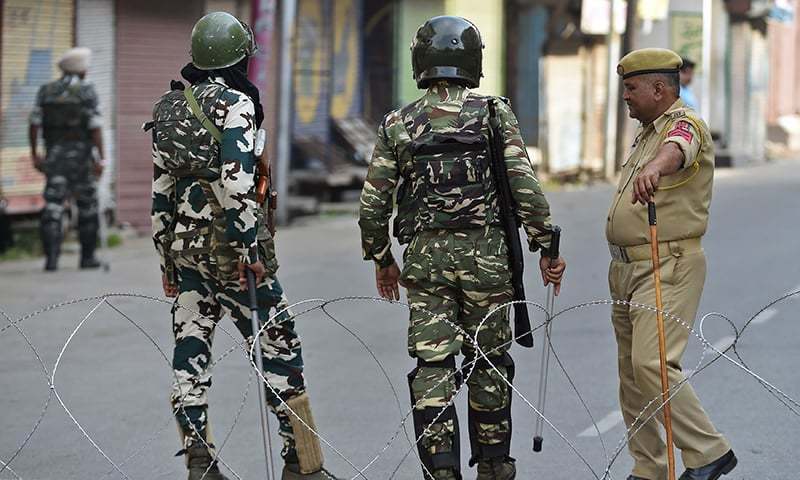 In a written statement to the US Congress, the Human Rights Watch (HRW) also points out that India has used “excessive force” to respond to protests by Kashmiris.

“The government’s focusing all blame for Kashmir’s past problems on outside factors — cross border militant groups and Pakistan’s support for them — ignores the government’s abusive and rights-violating tactics that over decades has increased support and recruits for militant groups”, says HRW’s Asia Advocacy Director John Sifton. Mr Sifton was one of half a dozen witnesses who also testified before the US Congress Tom Lantos Human Rights Commission this week on the situation in held Kashmir. The written statement notes that there has been a spike in violent protests and militant attacks in Kashmir in recent years. “Indian security forces have often used excessive force to respond to protests, including using pellet-firing shotguns as a crowd-control weapon, which have caused several protester deaths and many serious injuries,” the report adds.

“Indian troops have seldom been held accountable for human rights violations that have occurred during counter-insurgency operations.”

The statement notes that India’s Armed Forces Special Powers Act (AFSPA) continues to provide Indian soldiers effective immunity from prosecution for serious human rights abuses. Since the law came into force in Kashmir in 1990, the Indian government has not granted permission in any case to prosecute personnel in civilian courts. The report that Indian government has also “repeatedly imposed” internet shutdowns in Kashmir, restricting mobile and broadband internet services. There have already been 55 instances of shutdowns in the state in 2019, the largest number in the country. “India has continued to lead the world with the largest number of internet shutdowns. … As of November, authorities in India had ordered 85 shutdowns,” HRW adds.

This is “the legacy of abuses” that the people of Jammu and Kashmir have suffered, although India is not been willing to confront these problems, the report adds: “And here we come to the crux of the issue: until the Indian government acknowledges and addresses how their own abuses impact the situation, problems in Kashmir are likely to endure.” Urging the US Congress to redress the grievances of the Kashmiri people, HRW says: “This is where Congress can act. While encouraging Pakistan to end their support to militant groups committing abuses in Kashmir, members of Congress should communicate to Indian government officials that their actions in Kashmir are adding to the human rights problems.” It urges Members of Congress to “challenge Indian officials to reexamine their rights-abusing practices” in Kashmir. Advising the US administration also to play role, HRW says: “US officials should insist that political leaders and others arbitrarily detained are released, that restrictions on communications are lifted, and that independent observers, including diplomats, foreign journalists, and rights activists, are able to travel freely in Kashmir.” Examining India’s general human rights situation, HRW notes that since the BJP first came to power in 2015, Indian authorities have been increasingly using sedition and criminal defamation laws to stifle dissent. “Journalists have been harassed, and at times detained, for their reporting or critical comments on social media, and faced increasing pressure to self-censor—including on matters connected to Jammu and Kashmir.”

Mob violence against minorities, especially Muslims, by extremist Hindu groups affiliated with the BJP have continued amid rumors that they traded or killed cows for beef. Since May 2015, 50 people have been killed and over 250 people injured in such attacks, HRW adds. It notes that Muslims were also beaten and forced to chant Hindu slogans. Police have largely failed to properly investigate the crimes, stalled investigations, ignored procedures, and filed criminal cases against witnesses to harass and intimidate them. The report argues that most of these worsening trends appear to be connected to the increasingly nationalist rhetoric and actions of the ruling BJP party—reflecting a link to the human rights problems in Jammu and Kashmir. For this reason, Human Rights Watch recommends that members of Congress, when raising issues of Jammu and Kashmir, should raise these other broader problems as well. “To riff off the cliché phrasing, leaders in the world’s oldest democracy should be speaking to members of the largest democracy … to voice their concerns about common threats facing many democracies around the world: overwrought nationalism that demonizes minorities or critics or journalists, xenophobic rhetoric, and the relentless blaming of outsiders.”