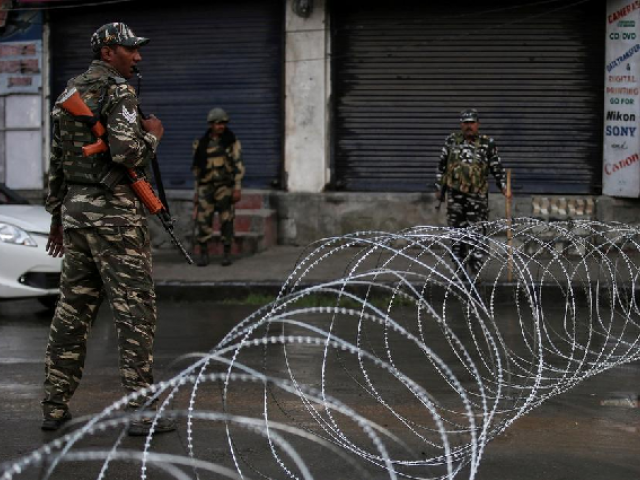 On October 31, 2019, the Jammu and Kashmir Reorganization Act, which was presented in Parliament by the Indian government on August 5, has come into force. It divides the India-Occupied Kashmir (IOK) into two union territories consisting of Ladakh and Jammu and Kashmir (J&K). From October 31, J&K will be fully integrated into the Indian Union and India’s tricolour flag will be hoisted by the Governor of J&K in Srinagar to mark the final absorption of territories into India. Unlike the days of October 27 and August 5 — which are remembered by the people of J&K as a symbol of Indian occupation — October 31 will be celebrated in India as the day when the special status of J&K formally ended. On October 31, the new Lieutenant Governors of J&K and Ladakh, Girish Chandra Murmu and Radha Krishna Mathur respectively, were to be sworn into office. The recently held local J&K local body elections were fully boycotted in the Valley where the voter turnout was negligent, but such dismal participation has not impacted the Indian state.

Since October 31 has been declared a historic day by New Delhi to transform the age-old dream of Hindu nationalists of annexing J&K in the Indian Union, the Modi regime is now focusing on implementing the Jammu and Kashmir Reorganization Act by allowing Indian nationals to buy property, cast their vote and permanently settle in J&K. As an incentive to 450,000 government employees of J&K, the 7th Pay Commission’s recommendations of increasing salaries will be effective from October 31. Most importantly, under the Act, delimitation of electoral constituencies will also take place which will benefit the Hindu nationalist BJP. According to a report titled “J&K Delimitation Process to Start after October 31” published on August 23, 2019 in The Economic Times, “the delimitation of parliamentary and assembly constituencies of Jammu and Kashmir will start only after October 31… As per the norms, the J&K delimitation commission will be headed by a retired Supreme Court judge… The process will start after October 31 and it will be undertaken by the Election Commission of India.” In order to ensure better communication linkages between IOK and the rest of India, the Udhampur-Srinagar-Baramulla rail link is expected to be operational by 2020. If IOK is connected by rail, New Delhi hopes to further strengthen its hold over the Muslim-majority Srinagar and other towns in the Valley. Once the Act is implemented by the Indian government, it may not be possible for the Supreme Court to roll back these measures. A two-pronged strategy has been formulated by the Modi regime to deal with the August 5 act. First, to punish eight million people of the Muslim-majority IOK by depriving them of basic freedoms to travel, communicate, offer Friday prayers in mosques and conduct peaceful protests; by cutting off internet, mobile phone services, imposing curfew, and carrying out arbitrary detentions and search operations. Nearly three months have passed since India imposed these cruel methods of castigating the Muslim Kashmiri population to prevent them from raising their voice against the abrogation of Articles 370 and 35-A.

Second, along with punitive measures, the Indian government is tightening its control by taking administrative measures to liquidate J&K’s identity. Carrots are also being offered to the people of J&K in the form of development programmes and investments to promote tourism, particularly in the Valley. The pay hike of J&K’s government employees and introduction of the railway system are tactics to diminish the resistance by Kashmiri Muslims against the military occupation.

While addressing a public meeting in Delhi, Union Minister Jitendra Singh said that, “benefits of abrogating the special status granted to Jammu and Kashmir under Article 370 will be beyond the imagination of people after October 31 and will unfold one by one”. India is certainly using psychological tactics to convince the people of these “benefits”. And it doesn’t matter to the Modi regime if the Valley’s eight million beleaguered people hate the Indian military and its occupation, because the regime considers land and not people as a source of its power.

Will October 31 mark a new era of brutal Indian control over J&K or can one expect a better quality of life for the locals because of their integration with the Indian Union? Or will administrative and financial measures taken by New Delhi to deepen its control over J&K be counter-productive and further aggravate the hatred amongst the Kashmiri Muslims against the Indian state’s occupation? If analysed in the context of national liberation movements across the world, Kashmir’s case is unique because the core of the resistance against the Indian occupation is in the Muslim-dominated Valley, but those fighting for self-determination are confronting a country which has deployed around a million security personnel to quell the movement. The Kashmiris are also handicapped because they are not getting any military or logistical support across the border albeit Pakistan’s moral, diplomatic and political support.

The growing confidence of the Modi regime may be an illusion but in reality India has been able to get away with the scrapping of Articles 370 and 35-A. Neither the UNSC nor the General Assembly has been able to pass a resolution to condemn the Indian assault on J&K. For India, its global networking with key world leaders including the US President is an indication that it doesn’t care about the criticism unleashed by the Turkish President and the Malaysian Prime Minister on India’s blatant violation of human rights in IOK.

India’s power consolidation in J&K is also indicative of a strong BJP government which has a two-thirds majority in the lower house. Although, the BJP achieved pyrrhic victory in the recently-held state assembly elections of Haryana and Maharashtra, the diminishing voices against Modi’s Kashmir policy is another indication of J&K’s marginalisation in the Indian political scene, as the opposition parties and human rights’ organisations maintain a low profile. The Modi regime is least mindful of using unabated force against peaceful demonstrations in the Valley; the lockdown and giving a practical shape of its policy of ethnic cleansing by settling non-Muslims in the Muslim-majority area. The New Delhi-installed governor in Srinagar has made it clear that state elections in J&K will only be held after the delimitation commission is through with its work so that pro-liberation and independence parties are marginalised.

Ironically, Pakistan, AJK and IOK will celebrate October 31 as a day legalising New Delhi’s control and ensuring the transformation of J&K like any other Indian state. Another day has been added along with February 5, August 5 and October 27 to condemn the Indian occupation of J&K. Will IOK ever see the light of freedom or will its beleaguered population just be engaged by their outside supporters by celebrating such days? Pakistan’s defence policy of dealing with India’s occupation of J&K is providing enough space to New Delhi to further consolidate its power there.