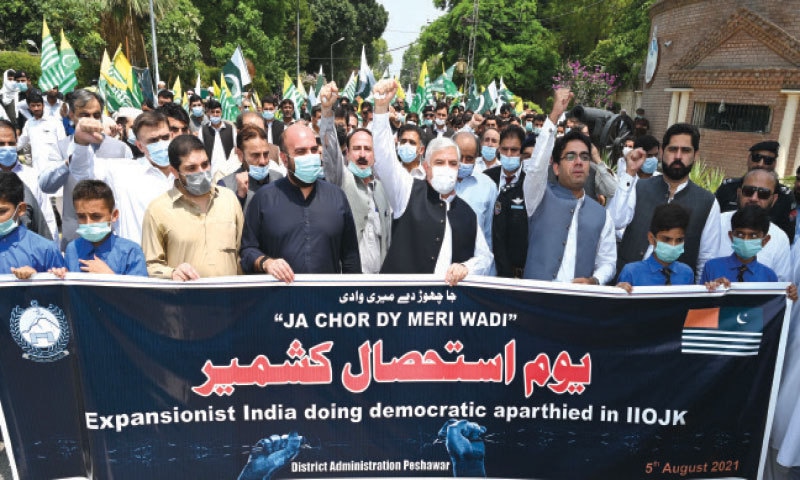 PESHAWAR: Rallies and walks were held in different parts of Khyber Pakhtunkhwa and Gilgit-Baltistan to show solidarity with the people of Kashmir on completion of two years of Indian siege of the occupied territory. In Peshawar, the walk was led by Chief Minister Mahmood Khan. The participants of the walk were carrying banners and placards inscribed with slogans expressing solidarity with the people of India-held Kashmir. Besides, provincial ministers Taimur Saleem Jhagra and Kamran Bangash, MPA Malik Wajid and people from different walks of life participated in the rally. According to a statement, the chief minister said on the occasion that for the last seven decades, India had gone all out to deprive Kashmiris of their right to self-determination. On August 5, 2019, India started a new and gruesome chapter of atrocities and tyranny by revoking special status of Kashmir, he added.

He said that Kashimris had been facing severe lockdown for the last two years. “People of Kashmir are not alone in this tough time, each and every Pakistani stands by them and we will continue to support their just struggle at every forum,” he added.

The chief minister urged the world community, especially United Nations and human rights organisations, to take notice of human rights violations in India-held Kashmir and play their role to give the Kashmiris their right to self-determination. In Mansehra, a rally was taken out from the Rescue 1122 offices that culminated at the same place after marching through various roads. In Upper Kohistan a rally was held to observe Youm-i-Istehsal Kashmir. Led by the additional deputy commissioner, Faiz Ahamd Qureshi, the rally passed through different roads.

The participants of the rally raised slogans in support of Kashmiri brethren. “The people of occupied Kashmir are besieged by the Indian army but time is not far off when they will get their right to self-determination,” said Mr Qureshi.

In Lower Kohistan, a rally was also taken out to mark the day. The rally, which started from Garrison high school, culminated in Pattan area. JUI-F leader Maulana Kareem Dad and Maulana Ahmad Ali also addressed the rally.

In Bajaur, the walk was led by the additional deputy commissioners, Zameen Khan Momand and Sohil Aziz, the assistant commissioner, Hamza Zahoor, and others. In Gilgit, rallies and events were held to observe Youm-i-Istehsal Kashmir. GB Assembly members, ministers, religious scholars, political workers, government officials, students and people from all walks of life attended the rallies. The participants of the main rally walked from Chief Minister’s House to Chinar Bagh Gilgit. Chief Minister Khalid Khurshid Khan led the rally.