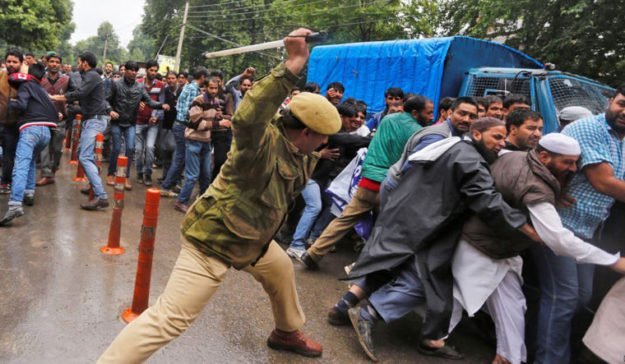 Azad Jammu and Kashmir (AJK) President Sardar Masood Khan has welcomed United Nations Secretary General António Guterres’ call to India to stop killing of innocent children and arrests of the youth by its forces in Occupied Kashmir. “This is a good omen that at last, the United Nations has broken its silence over the situation of the disputed territory. But instead of making calls, the international community should bring India to justice for its crimes against humanity in Indian Occupied Jammu and Kashmir (IOJ&K).”

He remarked while commenting on the latest report released by the UN Secretary General. The AJK president said that the report particularly speaks about the killing of eight innocent children, use of pellet guns to render the youth blind and the arrest of 68 children at the hands of Indian occupation forces in the disputed territory. He, however, revealed that actually thousands of Kashmiri children have been martyred, hundreds of youth arrested and tortured in prisons and detention centres, and thousands of children were made orphan during the last 30 years.

According to the data of a civil society group of India itself, the AJK president said, a large number of children of 9 to 13 years of age were among the 13,000 civilians the Indian army has arrested during curfew and the lockdown in the different parts of the occupied territory since August 5, 2019.

“These children are still languishing in different prisons in northern India and Occupied Kashmir, and they are not being released even after the outbreak of coronavirus.”

He called upon the UN Secretary General to constitute an international inquiry commission as per recommendations of the report of the Human Rights Commission. The commission, he asserted, should be given the task to examine the human rights trampling in IOJ&K and submit its report to the United Nations. President Masood said that India is a country which remains unmoved in response to demands and the expression of concern by the international community. “In order to force India to respect human rights, it is imperative for the international community to take concrete steps.” While touching upon the skirmishes between the Chinese and Indian forces in Ladakh, he said that there was a great difference between the treatment of the Indian troops towards the defenceless Kashmiris and the attitude towards the Chinese army in Ladakh. “The Indian Army which has been blood bathing the innocent peaceful citizens in Occupied Kashmir and has been torching the whole localities on the fake excuse of attacks by freedom fighters, has fled from the Galwan valley of Ladakh abandoning corpses of its 20 troops.”

He said that India’s attitude in Ladakh suggests that it understands only the language of force.

Meanwhile, President Masood strongly condemned unrelenting ceasefire violations by the Indian troops from across the Line of Control (LoC), as four more civilians were martyred in Indian shelling on Wednesday.

The latest causalities occurred in Datot village of Nakyal Sector in Southern Kotli district when a mortar shelled from an Indian military from across the LoC hit a residential house, killing four inmates of the house instantly. He said that India had been continuing unprovoked firing along the LoC for a long time in violation of the ceasefire agreement. “The cowardly actions of India cannot deter the valiant Kashmiri people from their just struggle for their right to self-determination.”