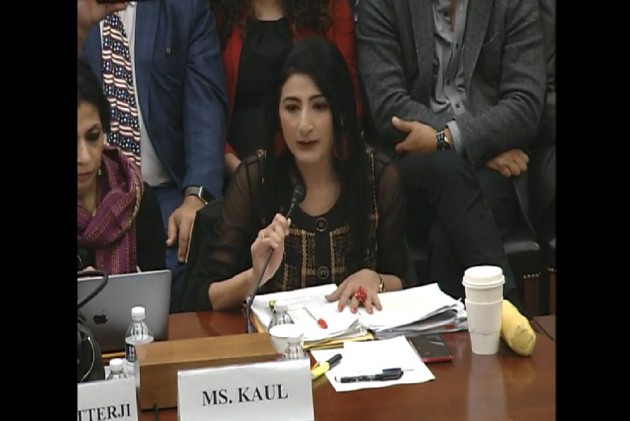 Kashmiri-origin author, Nitasha Kaul, on Tuesday, said the government was misleading the people by claiming that by abrogating Article 370 and Article 35-A, Kashmiri women would be empowered and their rights enhanced. She termed such claims as "red-herring" and said these were the instruments used to justify the government's claim of "emancipating and liberating" Kashmiri women. Kaul, associate professor in politics and international relations at the University of Westminster, was testifying at the US House Foreign Affairs Committee hearing on "Human Rights in South Asia" in Washington.

The hearing was convened by Congressman Brad Sherman, Chairman of the sub-committee on Asia, the Pacific, and Nonproliferation of the House Foreign Affairs Committee. In reference to the claim that under Article 35-A, Kashmiri women are stripped of their property rights once they marry a non-resident of Jammu and Kashmir, Kaul said the state High Court had struck down this provision in a landmark judgment in October 2002. In 2002, the Jammu and Kashmir High Court held that women who married to non-permanent residents will not lose their rights, though children of such women will not enjoy succession rights.

Kaul further said that after Article 370 was made defunct, BJP leaders said "we want to go Kashmir and marry fair women". Kaul argued that if striking down of Article 370 was done for the welfare of Kashmiri people, "why does it need tens of thousands of troops to be brought in, why does it happen overnight without any consultation of the people and depriving the population from saying anything?" She said it was an "egregious human rights violation" that goes against consent and fundamentals of dissent, as they relate to democracy. "This is an arbitrary use of power with no accountability."

In response to Indian journalist Aarti Singh Tikoo, who also testified at the hearing, Kaul said that Kashmir issue is not a communal problem.

"If Kashmir were a communal problem, then Muslims in India would feel same as Kashmiri Muslims. And they do not (feel the same)," she said, adding that the issue has rather been communalised.

"There is a political problem which is compounded by human rights violations," Kaul said.

In her testimony, Tikoo said: "Throughout these 30 years of conflict, Islamic jihad and terror in Kashmir perpetrated by Pakistan has been completely ignored and overlooked by the world press. There is no human rights activists and no press in the world which feels that it is their moral obligation to talk or write about the victims of Pakistani terror in Kashmir.” During the hearing, several US lawmakers urged the Indian government to "fully restore" communication in Jammu and Kashmir and said India, being the world's largest democracy, needs to uphold its commitment to human rights. Congresswoman Ilhan Omar said that BJP and Prime Minister Narendra Modi-led government has threatened "common values of human rights and democracy". In his opening remarks, Congressman Brad Sherman said, "The entire world is focused today on what is happening in Kashmir." He expressed concerns over the human rights situation in Kashmir, saying that there are severe restrictions on freedom of movement and communications. The lawmakers called for the release of detained politicians and activists.