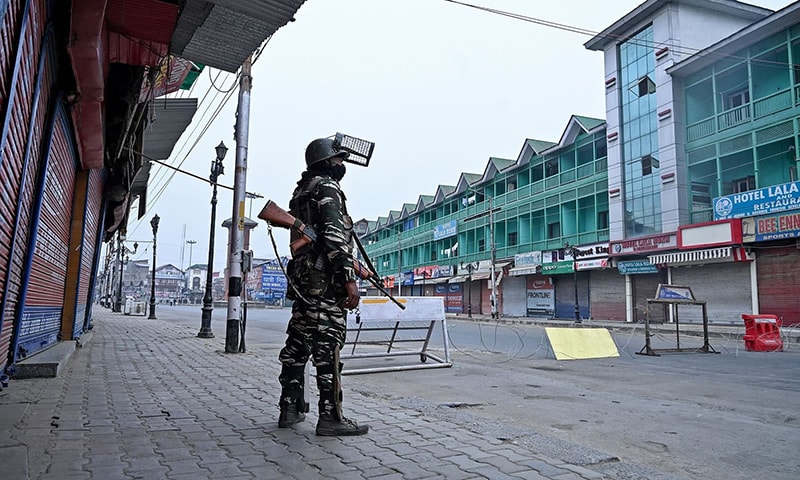 Police in occupied Kashmir have arrested a long-serving counterinsurgency officer for allegedly having ties with Kashmiri groups fighting against Indian rule, officials said on Sunday.

"Police intercepted a car in southern Kashmir on Saturday night and arrested Deputy Superintendent Davinder Singh along with two [Kashmiri fighters] and their civilian aide," Inspector General Vijay Kumar told reporters in Srinagar. The case has rattled the Indian security apparatus in the region, where Kashmiris have been fighting for decades, demanding independence or a merger with Pakistan. Kumar called the arrests a big operation and claimed that one of the arrested Kashmiris was a top commander of the group Hizbul Mujahideen, who had reportedly deserted police ranks in 2017 with four weapons.

He alleged that the commander, Naveed Baba, was second in command in Hizbul Mujahideen.

"Some weapons and ammunition were recovered from the arrested men," Kumar said.

"The issue is very sensitive and all intelligence agencies and police are jointly interrogating the officer," he said. "Given the circumstances, this is a heinous crime." Singh has long served in the Indian police's Special Operations Group, a dreaded counterinsurgency unit that has been widely accused by Kashmiris and human rights groups of some of the worst violations reported during the last three decades of conflict; from summary executions, torture and rape to holding suspects as well as civilians for ransom. Singh was currently working at the anti-hijacking unit at Srinagar's airport, one of the most fortified and heavily guarded airports. Last week, he was among the officers who received New Delhi-based foreign envoys of 15 countries who came to visit the region for the first time after India unilaterally stripped occupied Kashmir's semi-autonomous status and imposed a communications and security lockdown in August. The European Union had refused to take part in the diplomatic visit because they would not be allowed to meet detained local politicians, reports said.

Singh was once injured in an operation and was later given the Indian president's gallantry award.

This is not the first time Indian law enforcement officers have been implicated in aiding the freedom movement in Kashmir, one of the most militarised zones in the world. In 2012, Indian police arrested two intelligence officials and two low-ranking police officers for ties with Kashmiri fighters in the region. In 2006, three Indian soldiers and two police officers were detained for alleged links with a Kashmiri group. The police force removed the two officers from service, without revealing if they were charged with any crime, while the army has remained quiet about the status and fate of the detained soldiers.