Barbaric, cowardly and unlawful: India’s maltreatment of the children of Indian occupied Jammu and Kashmir

India has been gravely violating human rights in Jammu and Kashmir for decades. When it comes to children, any violation of their rights is absolutely intolerable and cannot be justified on any grounds whatsoever. The facts and figures recently revealed in the United Nation’s report titled, “Children and Armed Conflict,” published on the 15th of June 2020 are deeply upsetting. A country whose government purposely chooses to harm children is a country that should be looked down upon by the entire world. 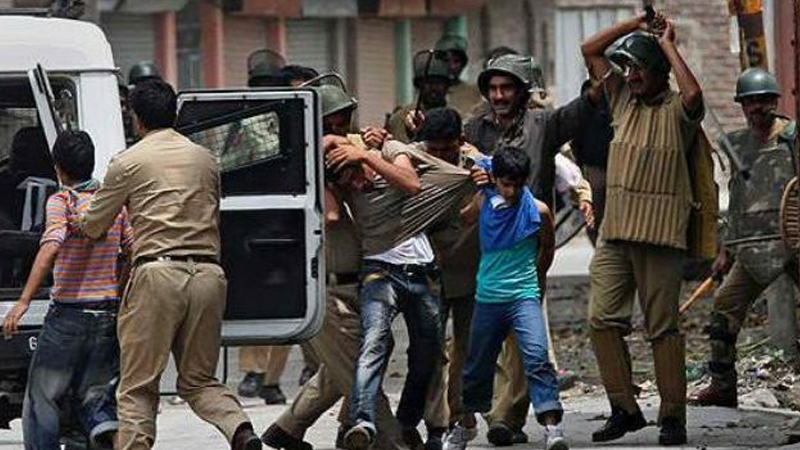 The report states that eight children were killed and seven were maimed between the ages of one and 17. Such barbaric actions against the children were committed by or during joint operations of the Central Reserve Police Force, the Indian Army (Rashtriya Rifles) and the Special Operations Group of the Jammu and Kashmir Police, among others. The report notes that the casualties that occurred were mainly caused by torture in detention, shootings, including from pellet guns, and cross-border shelling. Office of the United Nations High Commissioner for Human Rights (OHCHR) in its update on the situation of human rights in Indian administered Kashmir in 2019 stated that ”the 12- gauge pump-action shotgun firing metal pellets is one of the most dangerous weapons used in Kashmir.” Further noting that the weapon is not deployed elsewhere in India.

It is depressing to note that 68 children have been detained in Jammu and Kashmir by the Indian security services on national security-related charges, according to the report. Under no grounds can such detention of children be justified. The Indian security services have disgraced themselves by such cowardly acts. India vigilantly protects its children. Under Article 39 of India’s Constitution, the State is responsible to direct its policy towards securing that the tender age of children is not abused and that children are given opportunities and facilities to develop in a healthy manner and conditions of freedom and dignity and that childhood and youth are protected against exploitation and moral and material abandonment. This ensures that the legislature of India, armed forces and Prime Minister Narendra Modi are aware that children need to be protected, then why is India inflicting such brutality against the children of Jammu and Kashmir? Every child, no matter the nationality is precious and deserves safety and security. Each child, no matter where they are born, are born with the right to live and not be unlawfully killed, maimed and/or detained.

The United Nations in the report verified attacks on nine schools in Jammu and Kashmir. This speaks volumes about India’s failure to protect the children. The Indian Constitution under Article 21A makes it the responsibility of the State to provide free and compulsory education to all children of the age of six to14 years. While the children of India enjoy their fundamental right to education, there remain attacks on the schools of children in Jammu and Kashmir. Every child, be it from India, Kashmir or the rest of the world deserves the right to an education. Many human rights organisations and NGOs have spoken about the maltreatment of children in Kashmir. United Nations chief Antonio Guterres stated in the same report that he remains concerned by child casualties in Jammu and Kashmir and called upon the Indian Government to take preventive measures to protect children, including by ending the use of pellets against children. Furthermore, he stated that he is concerned by the detention of children, including their arrest during night raids, internment at army camps, torture in detention and detention without charge or due process, and urged the Indian government to immediately put an end to the same. He added that the access of children to education and health services continues to be of concern.

When it comes to international conventions, India ratified the UN Convention on the Rights of the Child (UNCRC) as well as the International Covenant on Civil and Political Rights (ICCPR). India was also a signatory to the Universal Declaration of Human Rights (UDHR). The UNCRC states the fundamental rights that children everywhere are entitled to. These rights include the right to life, education, survival and development and protection from abuse, violence, or neglect, etc. It is written in Article 2 of the Convention specifically that, “States Parties shall respect and ensure the rights set forth in the present Convention to each child within their jurisdiction without discrimination of any kind, irrespective of the child’s or his or her parent’s or legal guardian’s race, colour, sex, language, religion, political or other opinions, national, ethnic or social origin, property, disability, birth or another status.” It is clear that the Indian government is in breach of this convention. As a signatory to the UNCRC, India is bound to comply with it by international law.

India is a state party to the ICCPR and obliged to ensure that no person is “subjected to torture or to cruel, inhuman or degrading treatment or punishment.” The preamble to the UDHR states, “… recognition of the inherent dignity and the equal and inalienable rights of all members of the human family is the foundation of freedom, justice, and peace in the world.” Furthermore, Article 1 states, “All human beings are born free and equal in dignity and rights. They are endowed with reason and conscience and should act towards one another in a spirit of brotherhood.”

The Declaration shall be kept constantly in mind by the Member States themselves and among the peoples of territories under their jurisdiction. It seems that India has ignored the UDHR.

Due to COVID-19 pandemic, children all around the world are suffering from mental health issues. In Indian administered Jammu and Kashmir, the plight of children seems never-ending due to not only the pandemic, but the draconian treatment inflicted upon them by the Indian government and armed forces as well.

In the backdrop of this, it has been reported that on the 16th of June, an earthquake of magnitude 5.8 hit Jammu and Kashmir, the third to hit the territory in three days.

When it comes to Azad Jammu and Kashmir, in the same report, no responsibility was attributed to the Pakistani armed forces or government for any casualties or attacks inflicted upon the children of Pakistan administered Kashmir. The UN chief appreciated Pakistan, he stated, “I welcome the Government’s continued efforts to protect the workers who are conducting the polio campaign.”

Children are innocent, delicate, and vulnerable. Each child irrespective of race, sex, colour, language, religion, political or other opinions, national, ethnic or social origin, disability, birth or other status deserve to live their life peacefully and happily with access to their fundamental rights.