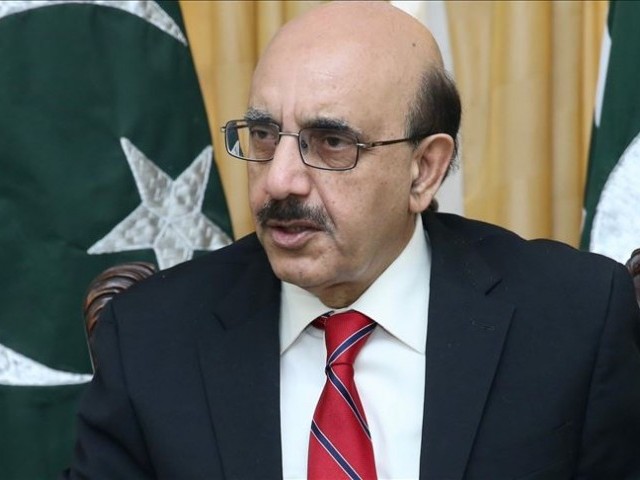 Azad Jammu and Kashmir (AJK) President Sardar Masood Khan, while citing the reoccupation of Jammu and Kashmir by India on August 5, said that a war has been imposed on us and we will have to fight this war for our existence. “This is a war for our sovereignty; for protecting our cultural and religious identity, and the rights of our Kashmir brothers and sister”, he said.

The president made these remarks while addressing a web-conference on “Solidarity with Kashmir during Covid-19 and lockdown effects on Kashmir and Pakistan” organised by the National Youth Empowerment (NYE). Students from Lahore and Sahiwal were presented at the conference. Chief Patron NYE Abdullah Hamid Gul also addressed the conference. The AJK President in his remarks said that many still are not aware of the gravity of the situation in Indian Occupied Jammu and Kashmir, especially post-August 5, when India re-occupied the disputed territory.

India has even issued fake maps showing AJK and Gilgit-Baltistan as part of India. “These fake maps are now available all over the internet”, he said while condemning these actions as a grave violation of international law and UN resolutions.

Masood Khan said that IOJK despite being an internationally recognised the disputed territory has been divided into two parts – Ladakh and Jammu and Kashmir – by the Indian government and that too without the consent of the people living there Resultantly, he said, India has brought these two newly divided areas under the direct control of Delhi and in turn inadvertently internationalized Kashmir. “The area now occupied by India is actually a part of Pakistan as its people had wished to accede to Pakistan and despite all efforts of India to coerce them into submission they have rejected their rule and writ”, said President Masood.

Terming August 5 and October 31 actions taken by India in IOJK as lebensraum, irredentism and expansionism, Masood said that the rights to permanent residence, ownership of property, livelihoods and education – as protected by international law – have been usurped by Delhi. Since April, this year, after the introduction of the New Domicile Rules the Kashmiris have been made homeless in their own homeland, he said.

Masood Khan said that Hindus from all over India are being allowed to settle in IOJK and their domiciles are being made ready in a period of only 15 days on the instructions of Delhi.

The president informed his audience of the dire situation in IOJK. He said that according to a recent report, over 13,000 Kashmiri boys have been picked up by Indian forces. These young Kashmiris – some as young as 9 years-old – have been imprisoned in prison houses all over IOJK and northern India where they are being subjected to unimaginable torture. Under the cover of the Covid-19 pandemic, numerous Kashmiris have been killed in staged encounters and so-called cordon and search operations.

“The Kashmiris people are fighting for their lives and this act of self-defence is an inherent right acknowledged in the UN Charter [Article 51]”, he said.

Masood Khan said that not only are Kashmiris being targeted but under the fascist rule of the RSS-BJP regime, Muslims all over India are being lynched, mobbed and – under the Citizen Amendment Act – are at risk of becoming stateless.

Responding to a question, the president said that the recent standoff between China and India has exposed the latter’s incapacity to face an equal military power. Having lived in China for eight years during his diplomatic career, the AJK president said that he had the opportunity to witness the steely resolve of the Chinese people. He added that the People’ Liberation Army is a far more professional, committed and resolute army as compared to the Indian army. “India has never triumphed in a war with an equal. Their experience entails fighting and killing its own people, and that too after disarming them.”

To another question on the role of the Organization of Islamic Cooperation in the resolution of the Kashmir issue, the AJK president said that the OIC has openly and resolutely supported the right to self-determination of the Kashmiri people and has staunchly reinforced Pakistan’s stance on the issue He further said that the OIC has issued strong communiqués on Kashmir condemning Indian actions. “This support of 57 brotherly countries cannot be undermined.” He said that this was an anomaly in itself that the tormentor has been elevated to such a position. India has to be de-seated from that position as grave human rights violations have been documented against it in reports published by leading international human rights organizations, and globally recognized bodies like the UN Office of the High Commission for Human Rights, OIC-IPHRC, Amnesty International, Genocide Watch, and the UK Parliament’s All-Party Parliamentary Group on Kashmir among others.

To the youth, the president said that they are the future of the nation and they should think passionately about the destiny of Pakistan. He urged them to contemplate on the current challenges faced by Pakistan and plan for the future. The youth, must have a passion for excellence and should aim to be second to none. We must all envision Pakistan as the top 10 economies of the world by the year 2050. He also urged the participants to reach out to their peers around the globe and raise awareness on the plight of the Kashmiri people

President Khan said that for becoming a great nation, we must excel on all fronts and achieve the full spectrum – military, diplomatic and economic. Developing countries of the yester-decades, like Argentina, Indonesia, Malaysia, to name a few, have progressed due to sheer struggle towards a collective commitment for development.