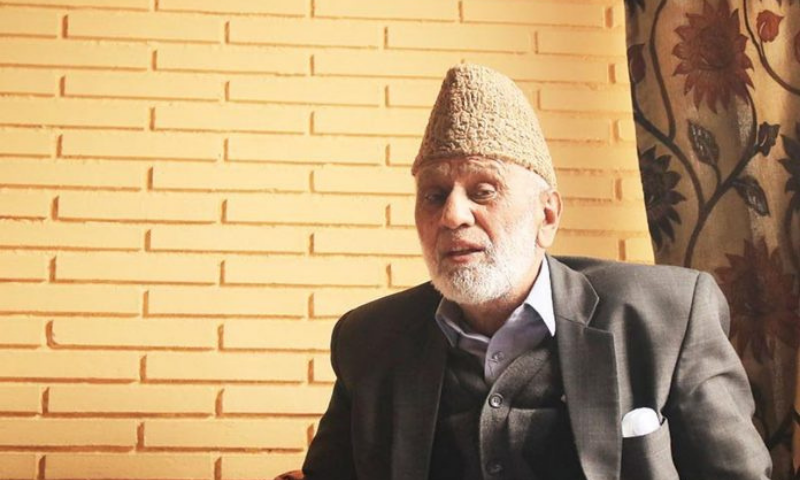 Senior Kashmiri leader Mohammad Ashraf Sehrai who challenged India’s rule over occupied Kashmir for decades died on Wednesday while in police custody. — Photo via The Print

Senior Kashmiri leader Mohammad Ashraf Sehrai, who challenged India’s rule over occupied Kashmir for decades, died on Wednesday while in police custody. He was 78.

Sehrai was admitted to a government hospital with multiple ailments on Tuesday from a jail in the southern Jammu region, officials and his family said.

Sehrai’s son, Mujahid Sehrai, said his father was denied proper medical care while in jail. He said he spoke to his father 10 days ago and he complained of ill health.

“He told us several times in the last few months during his two phone calls a week to home that he was not getting proper medical treatment,” his son said. “We moved a court on April 16 with a petition seeking proper medical assistance for him but the court was yet to review it.”

Sehrai was arrested last July under the Public Safety Act, which allows authorities in occupied Kashmir to imprison anyone for up to two years without trial.

Last week, the All Parties Hurriyat Conference said it was concerned about the health of hundreds of Kashmiri political detainees as India faces a massive health crisis because of an explosion of coronavirus cases. It said the prisoners were being denied “even basic amenities”, leading to “serious health problems among the prisoners”.

India has arrested thousands of Kashmiris under the Public Safety Act since 1989, when an armed struggle erupted in occupied Kashmir seeking the region’s independence or merger with Pakistan. Rights groups say India has used the law to stifle dissent and circumvent the justice system, undermining accountability, transparency, and respect for human rights.

Sehrai was one of the staunchest supporters of Kashmir’s merger with Pakistan. He was head of Tehreek-e-Hurriyat and a member of the largest religious and political group, Jama’at-e-Islam.

He spent more than 16 years in various Indian jails in a political career that spanned nearly six decades. His son was killed in a gunfight with Indian troops in April last year in the region’s main city of Srinagar. He was a member of Kashmir’s main fighter group.

Mohamad Junaid, a New York-based Kashmiri political anthropologist, said “there is no difference between killing and actively creating the conditions of someone’s death.” In a tweet, he said, “When a state can’t take care of its own people, how could it ever look after the health of political dissidents it has declared as enemies and imprisoned?”

Sehrai is survived by his wife, two daughters, and three sons.

“He remained incarcerated in Indian jail under squalid conditions despite serious deterioration of his health and the prevailing Covid-19 crisis,” the Foreign Office (FO) commented in a statement.

It said that India’s attempt to portray Kashmiri leaders as “terrorists” and then prosecute them through “concocted cases” was a violation of international human rights and international law, including the United Nations Charter and resolutions passed by the UN Security Council and UN General Assembly.

“As the Covid-19 situation in India deteriorates, we also remain deeply concerned over the health and safety of the incarcerated Kashmiri leaders as well as other innocent Kashmiris, languishing in jails at undisclosed locations. Most of these jails are overcrowded and don’t have any provision for precautions against Covid-19.”

Some of the incarcerated Kashmiri leaders had already contracted the coronavirus in jail as per reports but were not provided medical treatment, the Foreign Office said.

It demanded that the Indian government “immediately release” the jailed Kashmiri leadership as well as innocent Kashmiris.

“We once again call upon the UN and International Committee of the Red Cross to urge India to drop all fabricated charges against political leaders of [occupied Kashmir] and provide them complete legal protections, including the right to a free and fair trial.

“Pakistan will continue to support the Kashmiri people in their rightful struggle against Indian oppression till the realisation of their inalienable right to self-determination as enshrined in the UNSC resolutions,” the FO added.

Paying tribute to the late leader, Qureshi said Sehrai made a “significant contribution to the Kashmiris’ struggle for their right to self-determination and suffered lifelong persecution at the hands of India”.

He also braved his son’s extrajudicial martyrdom last year with exemplary fortitude, the foreign minister said, adding that despite this, Sehrai continued his struggle against India’s oppression and illegal occupation.

He shared that he was chairing a meeting of the committee when he received the news of Sehrai’s death, adding that the committee passed a unanimous resolution to pay tribute to the Kashmiri leader.

“Illegally jailed Hurriyat [leader] Ashraf Sehrai was martyred while in the notorious Udhampur prison since July 2020 ... Kashmiris will not be silenced by Indian fascism,” tweeted Minister for Human Rights Shireen Mazari.

“He dedicated his life for Kashmir’s self-determination,” Yousuf said, calling upon the Indian government to “release all those detained on political grounds” to create a conducive environment.