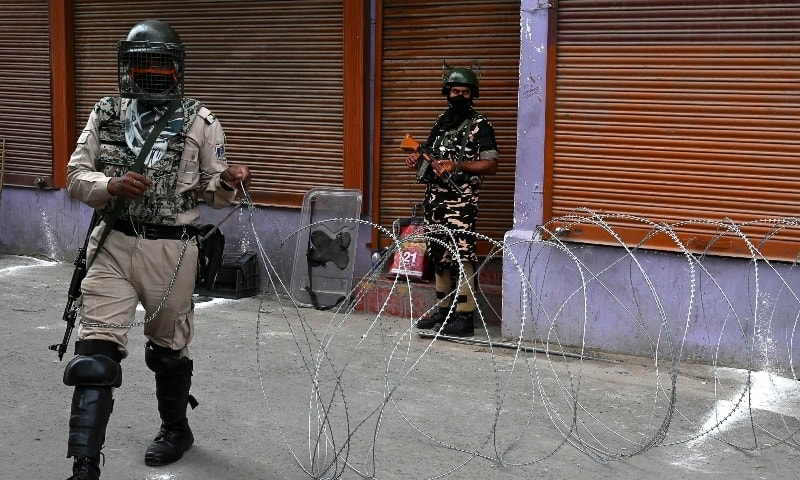 Pakistan on Sunday condemned the use of tear gas and pellet guns by Indian authorities on Muslims taking part in a Muharram procession in occupied Kashmir a day earlier. In a statement, FO Spokesperson Zahid Hafeez Chaudhri said that due to the illegal and indiscriminate use of pellets, dozens of Kashmiris were wounded and some had sustained eye injuries causing permanent blindness. "Indian occupation forces in occupied Kashmir have been using pellet guns and lethal cartridges since 2010 resulting in a large number of deaths and grievous injuries to thousands of Kashmiris, including women and children. "The Kashmiri youth has been systemically targeted in this deadly campaign."

On Saturday, Indian forces opened fire with shotgun pellets and tear gas on a Muharram procession by Muslims in occupied Kashmir, injuring dozens of people who had ignored a ban on religious gatherings, according to witnesses. At least 40 people were injured, witnesses said. About 25 people were taken to a nearby clinic with pellet wounds, some with their faces and bodies covered in pellet marks, a doctor said on the condition of anonymity.

In a statement released today, the FO spokesperson said that indiscriminate targeting of civilians with pellet guns, causing excessive and permanent injuries and even deaths, was a clear violation of human rights and humanitarian law. "The government of India is in clear violation of the UN basic principles on the use of force and firearms by law enforcement officials and the UN code of conduct for law enforcement officials.

"The BJP leadership must realise that it is directly responsible for the illegal actions of Indian occupation forces. "No illegal acts, such as the Armed Forces Special Powers Act (AFSPA) and the Public Safety Act (PSA), can provide legal cover to a crime recognised as such by international law." The spokesperson urged the international community to remain cognizant of human rights violations in occupied Kashmir and "use all the tools at its disposal to hold India accountable".

"India must be made to fully comply with its international legal obligations," the statement concluded.