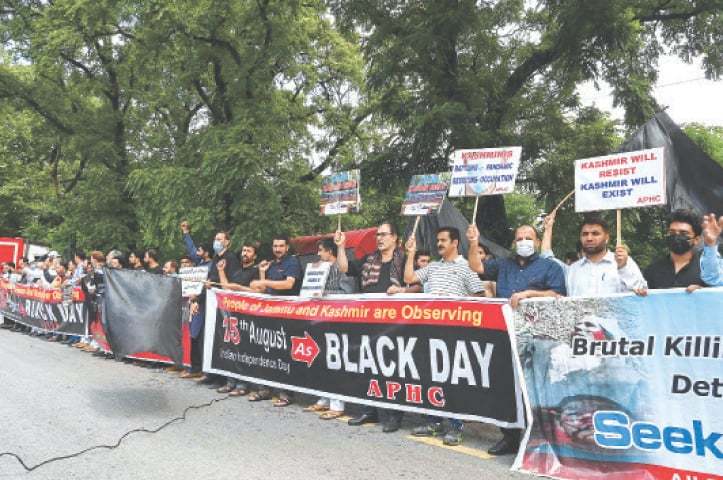 Kashmiri activists shout anti-India slogans as they take part in a demonstration outside the Indian embassy in Islamabad on Sunday.—AFP

MUZAFFARABAD: People from different walks of life took to a main thoroughfare in the capital of Azad Jammu and Kashmir (AJK) on Sunday to mark India’s independence day as ‘black day’ in protest against New Delhi’s perpetual denial of the right to self-determination of Kashmiris and unrelenting war crimes by Indian forces in occupied part of the disputed Himalayan region.

Resounding with anti-India slogans, the rally was in sharp contrast to the joyous celebrations held here a day earlier on the independence anniversary of Pakistan, in what the officials said was a clear manifestation of the final will of Kashmiris.

“Yesterday, we enthusiastically celebrated the independence day of Pakistan, our advocate and supporter, to renew our bonding with it and today we are on the streets to express abomination of the oppressor India which has been perpetrating the worst ever human rights violations on our innocent brethren across the divide particularly after stripping the occupied territory of its special status,” said Khawaja Farooq Ahmed, the newly elected Pakistan Tehreek-i-Insaf’s (PTI) lawmaker and its central joint secretary at the outset of the anti-India rally he led in the state capital.

Organised by the state-run Jammu and Kashmir Liberation Cell in collaboration with Pasban-i-Hurriyat, an organization of post-1990 migrants from India-occupied Kashmir, the rally started from Burhan Wani Chowk and ended some 600 yards ahead at Garhi Pan Chowk with its participants wearing black armbands, holding black flags and black banners inscribed with anti-India and pro-freedom slogans.

“Independence Day of India is [a] Black Day for the people of Jammu and Kashmir,” read the two large banners held by participants in the front row.

At Garhi Pan Chowk, they also burnt some used tyres in “an attempt to draw attention towards the burning valley of Kashmir”.

Speaking on the occasion, Mr Ahmed said that deserted streets in Srinagar and elsewhere in occupied Kashmir and anti-India demonstrations in Azad Kashmir served as a renewed message for the United Nations (UN) and the international community that Kashmiris had rejected India from the day one.

“It’s ironic that a country that has usurped the fundamental right to freedom of Kashmiris is celebrating independence day without a semblance of shame,” he said of India.

Lambasting the UN for its “double standards” the PTI lawmaker questioned that if the world body could hold referendums in East Timor and South Sudan after insignificant unrests, why it was not meeting a similar obligation in Jammu and Kashmir which had been on fire for decades.

“Can’t the UN see how brazenly India has been violating Security Council resolutions on the decades old Kashmir dispute? Can’t it notice the mass killings in public and in prisons, use of pellet guns to blind peaceful protestors, molestation of women folk, arson of civilian properties and countless other forms of repression in addition to the latest abhorrent attempts to change the demography of the territory under its occupation?”

Mr Ahmed made it clear that people on both sides of the divide would not surrender their right to decide their future status on their own free accord and asked India and its sympathisers in the comity of nations to read the writings on the wall.

He also expressed his gratitude to the people and the government of Pakistan, particularly Prime Minister Imran Khan, for exposing the ugly face of fascist Hindutva driven regime in India on the one hand and their unwavering support to the Kashmiris’ just struggle on the other.

Prominent among others who spoke at the rally were refugee leaders Uzair Ahmed Ghazali and Mushtaqul Islam and PPP leader Shaukat Javed Mir.

Similar rallies and demonstrations were held at all other divisional and district headquarters in AJK.