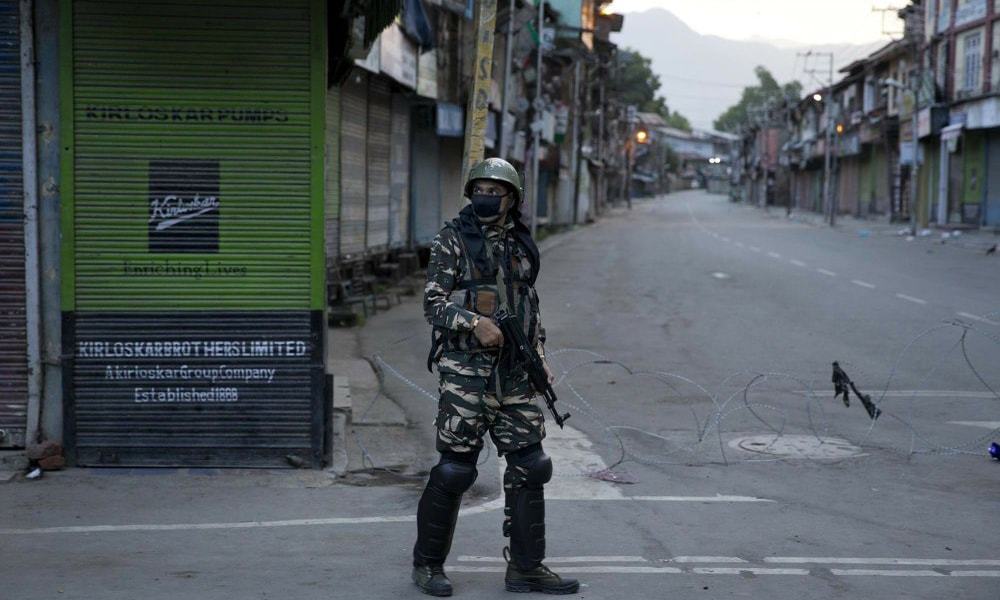 An Indian Paramilitary soldier patrols during curfew in Srinagar. The main city in the India-occupied part of the disputed Himalayan region of Kashmir has turned into a vast maze of razor wire coils and steel barricades as drones and helicopters hover overhead. — AP/File

ISLAMABAD: Foreign Secretary Sohail Mahmood on Tuesday urged the international community to pressure India to end human rights violations in occupied Kashmir and help in the peaceful settlement of the dispute.

He said this while briefing foreign envoys on the situation in occupied Kashmir.

The Foreign Office said that the briefing was part of the “regular diplomatic outreach” on the Kashmir issue. However, it took place ahead of the upcoming tour of Delhi-based foreign diplomats to occupied Jammu and Kashmir on Feb 17 and 18.

The visit has been arranged by the Indian government to claim normalcy in the occupied valley.

The group is being taken by Indian government to occupied Kashmir includes European and Arab diplomats.

Speaking about the situation in occupied Kashmir, Mr Mahmood highlighted the continuing human rights violations and India’s illegal attempts to change the demographic structure of the region and the threat posed by these actions of India to regional peace and security.

Foreign diplomats taken by the Indian government to Kashmir last year were not allowed to independently evaluate the situation and their movements and interactions were also severely restricted. The upcoming visit is unlikely to be any different from the previous one.