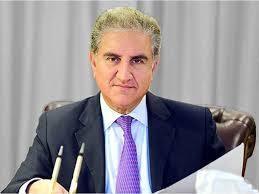 The foreign minister welcomed the Arab Parliament’s delegation that arrived in Islamabad on Sunday on a five-day visit.

Terming the Arab Parliament, a main body of the League of Arab states, Qureshi said Pakistan had excellent relations with Arab countries based on common religious and cultural values.

He mentioned that Pakistan had strong bilateral relations with the countries of the Middle East, where a large number of Pakistanis were residing.

Pakistan, he said, wanted peace and stability in the Middle East and as a founding member of the Organization of Islamic Cooperation was committed to playing a positive role in the unity of the international community. He said Pakistan considered a just solution to the Palestinian issue essential for peace in the Middle East. The foreign minister recalled of meeting the leadership of Arab countries during his official visit to Egypt, where he discussed bilateral matters with them.

He apprised the visiting Arab delegation on Pakistan’s geopolitical priorities that included building and developing partnerships with friendly countries and striving for peace and stability. Qureshi updated the Arab parliamentary delegation on the grave human rights violations in Indian Illegally Occupied Jammu and Kashmir, which he said were a threat to peace of the region.

He expressed confidence that the visit of the Arab parliamentary delegation would prove as an important milestone in the development of bilateral parliamentary relations.