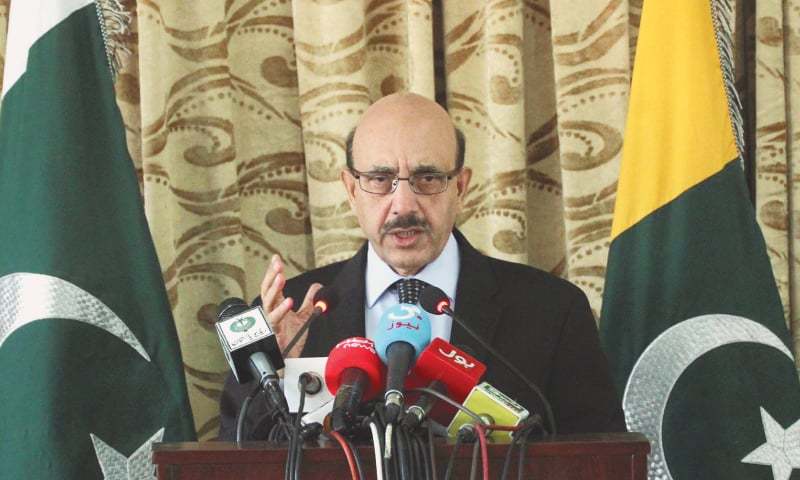 ISLAMABAD: AJK President Sardar Masood Khan said India is implementing a vicious plan in Kashmir and wants to eliminate the Kashmiris in the next two years.

“So technically, Pakistan doesn’t have much time and we have to inform the world community about the Indian vicious plan for Kashmir,” he said while addressing a seminar held here on Monday to highlight enforced disappearances and other issues in Indian-occupied Jammu and Kashmir.

APHC leader Abdul Hameed Lone moderated the proceedings of the seminar held under the aegis of Jammu Kashmir Self-determination Movement international on mass graves and enforced disappearances in India-held Jammu and Kashmir.

The AJK president said there were mass graves other than the identified 8,000 in held Kashmir. Extrajudicial killings have become a norm and Indian forces arrest youth and later gun them down in fake police encounters.

He said the world knows about the Indian atrocities being committed by the occupational forces in Kashmir but commercial interests were the major hurdle in taking action against India. He said after 500,000 domiciles of Kashmir were issued to Indians, the Indian regime was planning to award citizenship rights to 1,700,000 migrant workers.

He said Pakistan had achieved success at many international diplomatic platforms last year and India was defeated which was unprecedented in history. He said there is a need to transform Kashmir into a global civil society movement and youth must lead it. Chairman of Parliamentary Committee on Kashmir Shehryar Khan Afridi warned the world against a brewing nuclear conflict over Kashmir, saying the United Nations must immediately act to stop the genocide of Kashmiris and war crimes in Indian occupied Jammu and Kashmir before it was too late.

He said India was using backdoor channels to talk to Pakistan but Islamabad would not talk to India unless Kashmir is on the table. He said Kashmir has become a major issue in the global digital space and Pakistan would not allow India to mislead the world on the ongoing genocide in occupied Kashmir. Mr Afridi said past governments did not make Kashmir their top priority due to which despite rendering unmatched sacrifices by the Kashmiris the issue remained unresolved.

“We are reaching out to all the global platforms to raise the Kashmir issue.” He said Kashmir was his passion and the Kashmir committee was engaging with 22 global forums to sensitise the world on the issue.

“Indian civil society has also acted to point out human rights violations in Indian occupied Jammu and Kashmir,” he added.MNA Noreen Arif said parliamentarians should play a pivotal role in raising awareness about the war crimes being committed by the Modi regime in the held Kashmir. She said Kashmir was a nuclear flash point and any border skirmish may lead to a nuclear war having an impact beyond the region. She also urged the youth to play an active role in raising awareness on mass graves, enforced disappearances and rape being used as a weapon of war in held Kashmir. Former AJK minister Khwaja Farooq called upon the education ministry to add chapters on Kashmir in curriculum so that youngsters may better understand facts about the issue of Kashmir.