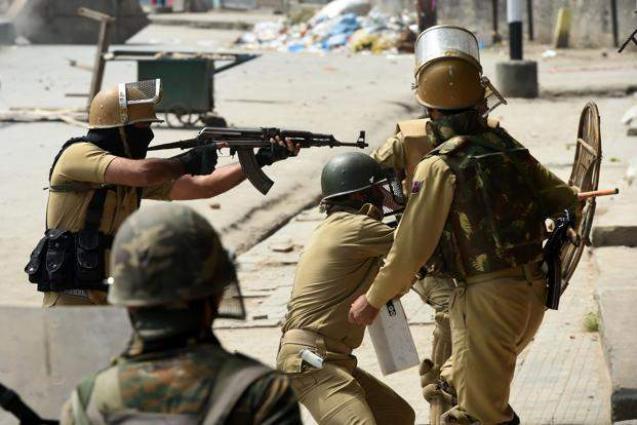 The All Parties Hurriyat Conference and other Hurriyat leaders and organizations have condemned the grave human rights violations by Indian forces and urged the United Nations and other international human rights bodies to come for rescue of helpless Kashmiris, in Indian illegally occupied Jammu and Kashmir

ISLAMABAD, (APP - UrduPoint / Pakistan Point News - 10th Dec, 2020 ) :The All Parties Hurriyat Conference and other Hurriyat leaders and organizations have condemned the grave human rights violations by Indian forces and urged the United Nations and other international human rights bodies to come for rescue of helpless Kashmiris, in Indian illegally occupied Jammu and Kashmir.

According to Kashmir Media Service the APHC General Secretary, Molvi Bashir Ahmad Irfani, in a statement issued in Srinagar on the World Human Rights Day, today, said that Modi-led Indian government had broken all records of atrocities in IIOJK.?He said that the real face of India had been exposed to the world and now the international community should know that no minority was safe in India.

Hurriyat leader, Javaid Ahmed Mir, speaking to a condolence meeting at Soura in Srinagar deplored that the people of IIOJK had been facing the worst human rights violations by Indian troops for the last over seven decades in general and since 1989 in particular. He said that the unprecedented sacrifices of the Kashmiri people would never go waste but would bring positive results soon.

The Jammu and Kashmir National Front spokesman in a statement issued in Srinagar said, the world must realize its moral obligations and stand up for the rights of the Kashmiri people.

He said, "It is time the government of India should be pressurized to rescind its recent actions and pave way for holding a referendum in the region to allow Kashmiris exercise their inalienable right, the right to self-determination." The spokesman of Jammu and Kashmir Employees Movement (JKEM) in a statement issued in Srinagar said, today the entire world is observing Human Right Day but the people of Kashmir are facing Indian brutalities.

He condemned the continued cordon and search operations, killings and arrest of youth by Indian troops in the territory and urged world human rights bodies to take notice of the worst situation of IIOJK. He said, these atrocities are being committed to suppress the Kashmiris' voice but freedom movements never get suppressed by these kinds of tyrannies.

The Chairman of Jammu and Kashmir Gujjar Pahari Democratic Forum, Chaudhry Shaheen Iqbal, in a statement in Srinagar said, every day of the Kashmiri people starts with arrests of innocent people and house searches. He said that draconian laws including Public Safety Act (PSA) and Armed Forces Special Powers Act (AFSPA), imposed by India in IIOJK give unbridled powers to Indian troops to arrest innocent people and kill them in fake encounters. He said, Kashmiris will never tolerate killing spree and atrocities and will continue their protest against these undemocratic and inhuman acts.