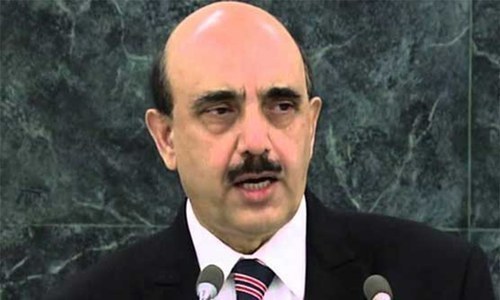 MUZAFFARABAD: Azad Jammu and Kashmir (AJK) President Sardar Masood Khan and Prime Minister Raja Farooq Haider have strongly condemned India’s move to grant domicile to non-Kashmiris, predominantly Hindus, and called upon the international community in general and the United Nations (UN) in particular to take stock of the unwarranted and arbitrary move regarding an internationally acknowledged disputed territory.

India had on Wednesday introduced new rules, designed to replace the rights of indigenous Kashmiris under Article 35-A of the Indian constitution that covered permanent residence, education, employment and acquisition of property. The villainous move was aimed at realising long cherished desire of the Indian government to change the demography of the Muslim majority state. In a statement on Thursday, President Khan made it clear that Kashmiris would never accept these rules and oppose them “tooth and nail”. He called upon UN Secretary General Antonio Gutteres to intervene because the issue was on the agenda of the Security Council. India, Mr Khan said, could not change the demographic composition of a disputed territory recognised as such by the UNSC resolutions. He also called upon the Human Rights Council and the International Committee of the Red Cross (ICRC) to take cognisance of the matter because Indian actions violated the 4th Geneva Convention, Additional Protocol I and the Statute of the International Criminal Court covering illicit transfer of population and changes in demography. The AJK president said the BJP-RSS regime had announced these heinous, arbitrary and unlawful rules under the cover of the coronavirus crisis and information blackout.

“This is a new phase of depredation and exploitation of Kashmiris, which will see a frenzied rush for land grab,” he said. Mr Khan pointed out that it was the beginning of ethnic cleansing and intensification of genocide in India-held Kashmir in violation of the international humanitarian law. He was of the view that the BJP-RSS regime had also used the domicile rule to divert attention from its failed policies on Covid-19 and poor economic performance. “A large number of migrant workers are on the roads, without food and shelter. Kashmir has been used as a scapegoat to hide that failure,” he said. He said the new domicile rule was nothing but a crass manifestation of Hindu supremacist doctrine of Hindutva. “India has already planned to allocate huge chunks of Kashmiri land for RSS parcharaksso that they can have a permanent foothold in occupied Kashmir to terrorise and brutalise Kashmiris and get for themselves lucrative projects and jobs.”

In a separate statement, PM Haider Khan said India had resorted to the second villainous move to advance its sinister Hindutva agenda in occupied Jammu and Kashmir, after the abrogation of disputed territory’s special status in August last year, at a time when the whole world was focused on prevention of the Covid-19 pandemic. “This speaks volumes about the roguery and moral turpitude of Narendra Modi-led regime in India which unfortunately many nations have so far tended to overlook for economic benefits,” he said. He recalled that the BJP-RSS leaders were on record having said that they wanted to deprive occupied Jammu and Kashmir of its Muslim identity by converting the majority of its Muslim population into a minority.

“The Modi doctrine has been tailored to target Kashmiris with unparalleled brutalities but Indian leaders should know that it will fail to deprive the indomitable Kashmiris of their fundamental right to self-determination, which has been promised to them by the UNSC itself,” he said. Mr Haider emphasised that since India’s Wednesday move was not only against the fundamental rights of the Kashmiri people but also a sheer violation of the UNSC resolutions on the disputed region, it warranted immediate cognisance by the P5 members of the UNSC.

He expressed the hope that the Covid-19 pandemic that had compelled around 190 countries to clamp lockdowns and curfews would change their approach towards the nations being ruthlessly persecuted for their struggle for emancipation, India occupied Kashmir being on the top.