Trump’s Pakistan Crisis is an Opportunity for Putin 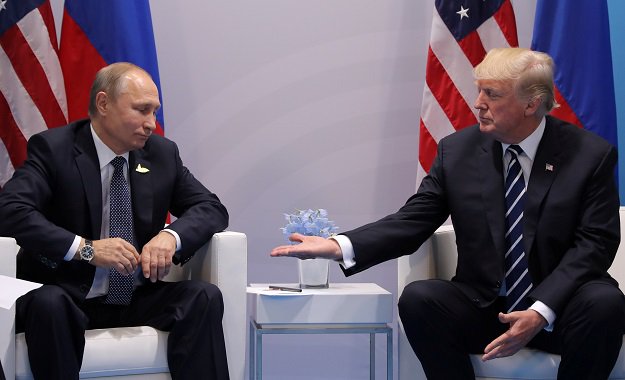 So the first thing the Republican US President Donald Trump did to start his new year was to open a cannon of insults against Pakistan, an old American ally from the Cold War days. The tirade of insults posted on twitter wasn’t factual or diplomatic, but then again neither President Donald Trump nor his kitchen cabinet in Washington DC is known for either of those. The Pakistani leadership, namely the Foreign Minister Mr. Khuwaja Asif was quick to reject Trump’s tweet but chose a careful diplomatic line for the official state policy will be delivered the old fashioned way, not on twitter. It however didn’t stop there, the White House Press Secretary declared that specific measures will be announced against Pakistan, the State Department placed Pakistan on a rather ironic list of ‘religious freedom violators’. The US Govt has also frozen all military assistance to Pakistan unless it sees the actions it wants to see from Pakistan, in other words; coercion is the method of choice now. The US Ambassador to the United Nations Nimrata Randhawa aka Nikki Haley accused Pakistan of ‘playing a double game’, the conservative US Senator Rand Paul wants all kinds of aid cut to Pakistan in favor of building roads and bridges in the United States. In short, the Washington DC has decided to ‘squeeze’ Pakistan in a sign of further desperation and frustration as its war in Afghanistan gets stuck in a self inflicted quagmire, the fears of another ‘Vietnam’ loom large in Washington. This scenario is more of a crisis for the Donald Trump administration than it is for Pakistan, but it also represents a unique geopolitical opportunity for President Putin.

This development in Washington isn’t unexpected for Pakistan; it is only a repeat of what the transactional relationship between the two countries is all about. That said, there are other key contributing factors at play here which are certainly responsible for accelerating this decision by Trump Administration. Some analysts have cited the recent UNGA vote on the status of Jerusalem as a contributing factor as Pakistan declared open support for the two state solution and voted against the controversial and arbitrary move by the United States just like much of the world did including all UNSC members excluding the United States. Another contributing factor is the increasingly influential Indian lobbying campaign by India to undermine the US, Pakistan relationship. While all of the aforementioned factors have their own merits, one cannot ignore the overarching geopolitical climate in the region, especially when Pakistan is increasingly reaching out to Russia to cultivate a log lasting partnership based on mutual interests modeled after its partnership with China. For example only recently the two countries are planning to sign a multibillion dollar gas pipeline deal as well as discussing numerous deals for military hardware.

The United States is obviously unhappy over such moves by Pakistan because it undermines its anti-Russia sanctions and attempts to isolate Moscow internationally. Then there is the ever increasing geopolitical symmetry between Pakistan, China, Russia, Iran and Turkey on the core issue of counter terrorism and the war in Afghanistan. The US policy has effectively been outflanked by regional countries working together to bring real peace in Afghanistan and the region at large.

With China, Iran, Turkey, all vocally backing Pakistan’s position on Afghanistan in the wake of the Trump administration’s India inspired ‘squeeze Pakistan’ policy, the leadership in Pakistan has decided to take its own countermeasures. Pakistan can well and truly be expected to ‘squeeze back’ because it is totally in a position to do so. For starters, if the United States refuses to pay reimbursements for rendered services by Pakistan aka the Coalition Support Fund, consequently those services including the vital geographic access to Afghanistan will be blocked. Pakistan also has been a key contributor in providing intelligence to the United States, which can be cut back. Pakistan has also announced that it will expel 1.5 million Afghan refugees who entered its territory on humanitarian grounds as a result of the decades old US intervention in the country. In addition to these measures, Pakistan is focusing only on stabilizing its side of the border with Afghanistan with a 2100 km long fence which will be completed by the end of 2018. The border with Afghanistan will also see hundreds of Pakistan’s paramilitary posts and forts pop up to harbor a permanent military presence to counter terrorist infiltration from Afghanistan’s lawless regions as well as stopping illegal migration, drug trafficking and smuggling of food and fuel into Afghanistan. These countermeasures are designed to increase the pressure on the US funded quasi govt in Kabul and ultimately on the United States.

This developing situation in Pakistan is certainly going to turn into a geopolitical crisis for Trump administration in the coming weeks and months; however such a crisis in such an important country is also a unique geopolitical opportunity for Mr. Putin. The aforementioned environment is now conducive for Russia to cultivate a truly strategic partnership with Pakistan, a country which is the centerpiece of the One Belt One Road initiative, controls strategically critical geography and possesses immense economic and military potential; therefore such a country in such close proximity with Russia is definitely a natural ally for Moscow. Through its close partnership with China, Pakistan’s leaders have proven that given a fair playing field, Pakistan is capable of cultivating, sustaining and nurturing long term strategic partnerships. Such a partnership is based on geopolitical rationality and there is clearly a symmetry of interest at play; Pakistan and Russia both need each other in fields like economics, military hardware, diplomacy, transit trade and above all geopolitically. In this context an opportunity lies for Mr. Putin to capitalize on by taking necessary steps to confidently establish such a partnership arrangement with Islamabad. The geopolitical vacuum left by the short sighted decisions taken by the Trump administration regarding its engagement with Pakistan can be filled by Russia, especially in areas where the United States is trying to ‘squeeze’ Pakistan, namely in the military hardware dimension. Mr. Putin has declared his intentions of providing military hardware to Pakistan to counter terrorism; if there is ever going to be a right time to act upon that intention, it is right now. Pakistan would also appreciate resolute diplomatic support from Moscow to relieve the engineered pressure from the United States. The US is effectively ‘punishing’ Pakistan for acting contrary to its geopolitical designs against Russia and China; it therefore becomes a geopolitical responsibility for Russia to cushion Pakistan when it is being ‘squeezed’ by the United States.